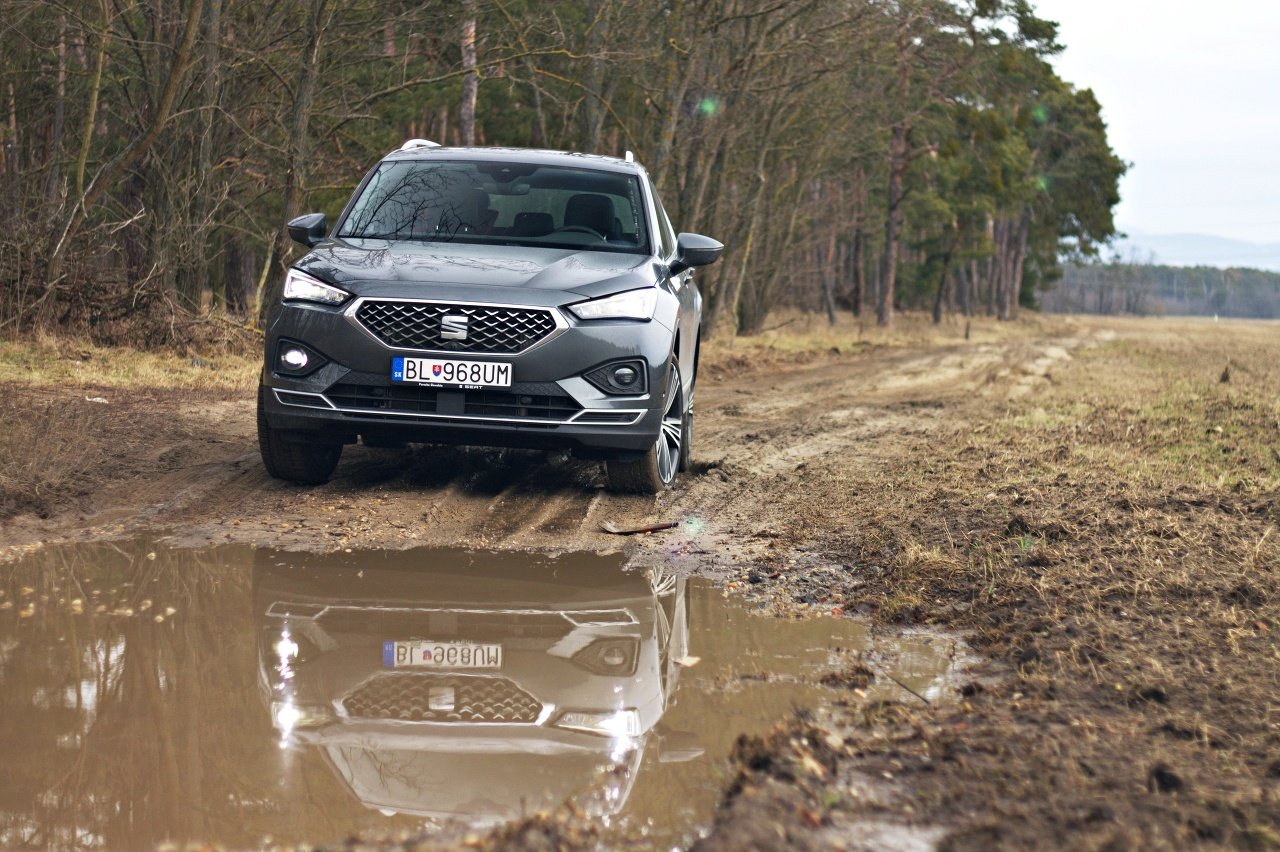 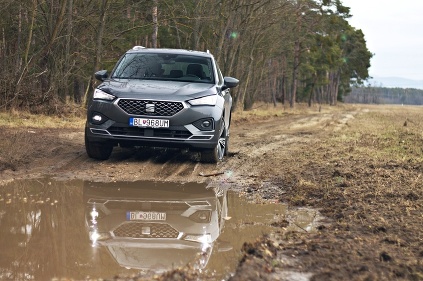 SEAT Tarraco is the largest Spanish-branded car. Produced in Wolfsburg. His brother is Tiguan.

Specifically, Tiguan Allspace. Both models share their customers with brotherhood. While Tiguan Allspace fits in the brand and cool sensitivity, SEAT Tarraco has a sense of emotion through emotional, vivid design and good, sophisticated convenience. But if the buyer chooses for each car, he may feel pleased that he has dug the system and bought it better and cheaper than his imaginary opponent. In both cases, however, the manufacturer wins. The client pays approximately the same amount. It depends only on what you prefer and what you buy.

This is confirmed by the configurators. The same engine, the same gear and SEAT Tarraco. Its genetic basis will overcome several hundred, perhaps more than a thousand euros. But change the conditions and win Tiguan Allspace. Having a well-dressed couple is a good choice. When the customer realizes that he is buying a car with a cost of around 35,000, the second character's option completes the first one. If the truth does not solve everything. In this case, the majority of the population will only decide on Tarraco. At least now, shortly after the start.

We had equal SEAT Tarraco in two engines, we created a dual video cassette for you. Here's the first section on basic information and driving with a 1.5 TSI gasoline engine:

The second part follows. This is dedicated to this diesel version:

Let's take a closer look at the tested diesel version with a 2.0 TDI engine with a maximum power of 140 kW (190 hp). The engine is available exclusively with the automatic 7-speed DSG gearbox and all-wheel-drive 4Drive. Currently it is on top of the offer along with the 2.0-liter 2.0-liter gasoline engine.

Interestingly, you have a lower diesel version, but also an automatic gearbox and all-wheel drive. This means that the all-wheel drive and manual transmission will not bring you, but you also have the chance to save a few euros in the last minute. But I do not recommend this. When you want 4Drive, take (at least) 190 horses. The big car needs them.

Conversely, if you do not drive all the wheels, the two-liter 150-liter diesel engine is a great choice. He has a lot of power to drive the Tarrac, and the consumption will not be higher than the consumption of a stronger version on all wheels.

The Tarraco diesel engine starts at 33,750 euros in style. The Xcellence equipment starts at € 36,060. The tested model was in Xcellence.

The design and layout of the dashboard elements are modern and stylish. The central display rises, but does not act so as to act as a glue. He fired lightly on the driver. Along with the digital dashboard, it significantly improves the clarity and accessibility of all features. With the help of the SEAT digital control panel, I know and easily compare all the features. Although the exclusion of aides would have been easier, in my opinion, with separate buttons. Even ACC under the wheel does not change that impression. The central display offers plenty of information and the system has excellent connectivity.

Thanks to Beats Audio, streaming music is worthy and clean. The verbal "pre-music" radio can boot the subwoofer in the boot more than is desirable, so it's good that you can restrict it and "amplify" it in your own audio files or just while listening to music.

Generally, the design of the dashboard and the center panel is very good. Everything has its place, its importance. The Volkswagen radar stick is better grip than the coddy.

The steering behind the steering wheel is very good. You sit high but comfortable, and you have a good look. The seats are comfortable, well-formed and do not need electrical help, you can adjust everything manually. Worse would be the change of drivers. When I am already visible, it is very decent even at night. Tarraco has Full Led lighting in basic equipment and this is a great thing. The lights are relatively intense, they also have good and distant shooting after the moon.

The position of the other places is also decent. It is possible to work with them. And those in the second row. Tarraco will provide enough space for the rear seats. Once you want to wear the adults in the back two rows, you will need at least basic knowledge of combinatorics or tetris … Combining the higher with the lower so that no one can restrict them may be larger challenge, especially with increasing height. Third, however, the seats are quite spacious to allow the lower figures to sit down and survive. This is a significant advantage compared to Kodiaq. There is also a third series and its use is a little more theoretical than here. The distance between the Tarrac cabin corresponds to the diameter between the large vehicles. This is something that will no longer succeed. But miracles are not waiting. He will, however, be glad that even after the third row there is space for smaller luggage. We are glad that under the raised floor there is a place to lining the luggage compartment roll.

Driving with twenty inch discs is convenient. The tax on style is not as big as it seems. Even these discs are well protected and can only be scratched with a dose of inaccuracies. The side walls of the tires are quite large and, combined with the proven adaptive push of the jaw, are above average. Since my trips have particularly obscure and Slovak roads, I will choose two to three numbers for smaller discs and balloons. Especially during the winter. Tarrac's basic size is 17 inches, sounds great for winter, for the summer I would choose the 18th octave. It is true that Xcellence starts in the 19th century. Well, at least I told you which device I would choose. Since the 19-inch cabs are sounding on poor and better Slovakian surfaces, you are in the second part of the video test, which is essential for this model.

It's nice that Tarrac's chassis can handle. Until you want to believe that with such a long and high car, you can also afford rake. The size of the car causes a calm pace in the curves and the dynamics of straight sections, but the car proves that it can handle even steep steering movements.

Undoubtedly, one of the most important elements of good driving skills (such a big car) is the all-wheel drive. 4Drive, 4×4, 4Motion, call it whatever you want, the essence is the same. Combined with well-closed traction control systems, you can really get rid of the snow. At the same time, the system is not convincingly left in the queue or in the muddy ways. And I tried it out. Well, he did not drown in the lush field. He carefully but convincingly spoke to everyone until he roared. This is the maximum of the Jeep and that's enough. Together with solid light, Tarraco proves that occasional trips on uneven roads are (so little) inclined.

My only remorse is to Lane Assist. It is switched on every time the engine is started. Turns out more difficult. On widespread empty roads you will not mind his behavior. But once the visibility gets worse, the snow will be on the brink, it will start ruining you. Just take a few seconds to decide that you are a failed driver who can not hold the wheel and kick you in the brakes. Without provoking him, he did it three times during the test. On the right, with both hands on the wheel and eyes on the road. He would do even more, but I prevented him from doing so. It scared me, crew and frightened the other participants in the movement. This is a new version of the helpline system that is more relevant to front-end help and is active after each launch.

Let's get to the point. The question is, is this engine enough to solve it, right? And yes, a little. Because the car is big and two more cylinders would be. But let's not forget that this is actually middle class, but not for those six-cylinder diesel engines. 190 horses are so good from my point of view. I certainly will not take it. Only when driving the front axle. 4Drive needs a stronger version of the two-liter four-cylinder engine.

Interestingly, the comparable Kodiaq in the Scout allows for an acceleration step from 60 to 100 km / h, but from 80 to 120 km / h the time is more than a second slower (8.5 seconds). The same engine, almost identical time, comparable mass, but probably another setting. The Kodiaq test passed a year ago. Since then, has Seattle changed so much, or has Seat got a better card, or has it received Tiguan? I'd like to try cars next to each other. Even the Kodiaq Sportline 2.0 TSI was three-tenths slower (7.5 seconds). We will see how Tarraco will be launched with a 2.0 TSI gasoline engine, I'm already curious.

By the way, Tarraco was tested by a colleague with a petrol engine with 1.5 TSI, accelerated from 60 to 100 km / h for a good 7.2 second (third gear). From 80 to 120 km / h the 4th stage was in the weak 10.55 seconds. There is a smaller volume and engine parameters, which has a growing problem with increasing air resistance, such as heavy and high cars (this is confirmed by the detailed acceleration tables of 0 to 80 or 0 per 100 by the manufacturer).

Even in normal driving, you feel that the engine must be switched on for the start. The high load in the driver's hand, which requires more dynamic parameters, should not prove it in the long run. Interestingly, table data (VW Tiguan Allspace) shows an acceleration of 80 to 120 km / h in this 4th engine in 8.5 seconds. This is unreachable in real terms. The table gives 2.0 TDI with a lower power of 8 seconds (4th). It does not even seem real to me, though much more realistic than the base gasoline engine. But I do not have that. From my point of view, the two-liter diesel with front transmission of the bridge is a smoothed but appropriate Tarraco engine. The gasoline engine is definitely more suitable for the city, but the diesel engine with the same power has a higher torque to better handle the load, while offering lower fuel consumption. Consumption of the gasoline engine is better absorbed by the colleague, for me it was about 8.5 to 9 liters under the same conditions.

If you want a universal SUV with up to 7-seat layout, Tarraco will certainly take into account. This is a nice, well-built car that delivers Spanish sprouts to the German genetic base. If you're thinking about driving. For me, they are winners of 2.0 TSI and 2.0 TDI. While the TSI is the most attractive, but still responds to the smallest number of people and the consumption will definitely show, the TDI will receive the most attention. Personally, I would consider a manual gearbox version. It does not drive all the wheels, but which one does it really use? This car is also a replacement for MPV, such as the Alhambra. Nor does it control the wheel all the way. Majority.

But I must admit that a fully equipped Tarraco with a powerful diesel engine and all-wheel drive does not have many drawbacks. If one exists, it can be overcome with little effort. Hard German base, Spanish emotions and Spanish perplexity. Tarraco is a versatile universe and it is difficult to find proper competition in its class. 8.5 out of 10 points.