First-hand: deadly foolishness, which is still a constant feature of Slovenian car parks 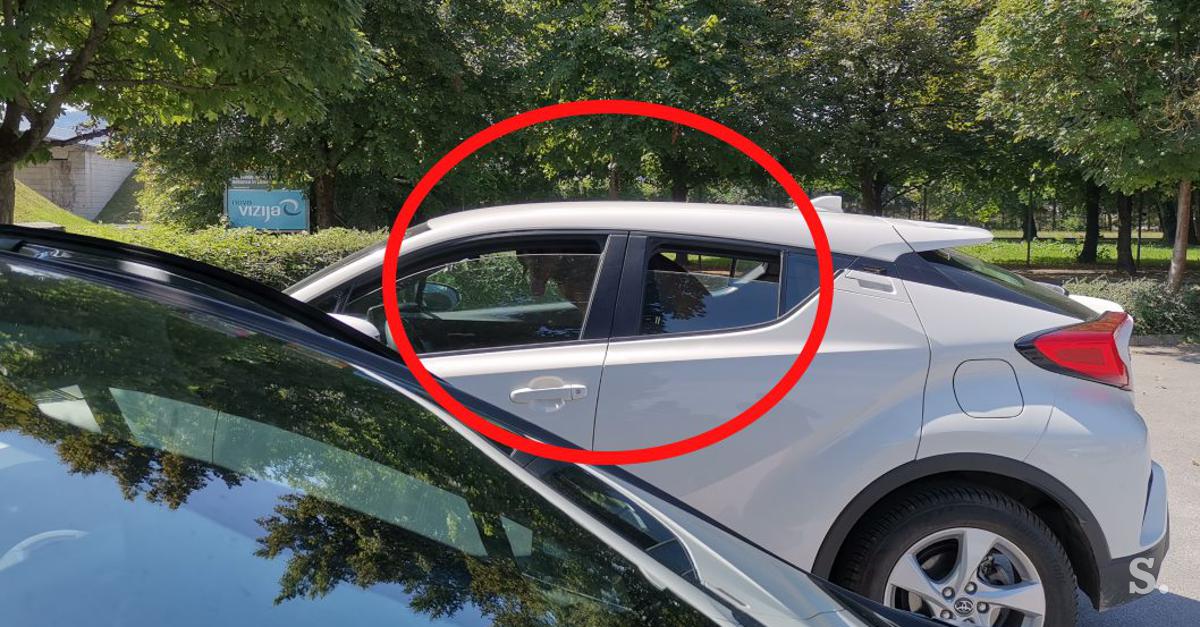 "It was not very short time", a policeman responding to our call on Saturday morning in the parking lot near the shopping center in Žalec, said the owner of the car in which the burning sun was actually at least 50 minutes, most likely is much longer, enclosed larger dog. The police procedure, which ended with a warning to the driver, was observed by the first type, and the vet explained to us what was happening with the dog's body, which the owner irresponsibly left in a hot metal cage.

On Saturday at 11.15 am I noticed that a big piece was locked in the parking lot near the mall in Žalec in a white toyota to my car. Toyota was parked in the same place and at least 10.55 was exposed to the sun when I first came back from the nearby fitness center to the car, put a bag and went to the store.

The car could be remembered because there were Austrian tablets, which in the flamboyant plates marked with CE stand out in Žalec. The owner of the car, namely Slovenka, later confirmed to the police that she was parked in the shade, which due to the installation of trees near the parking lot was not present in front of her car, probably means that the dog in the car was closed for more than an hour and a half.
Photo: Matic Tomsic


In Portoroz, Switzerland locked a dog in the car and went to the bar


At 11.20 am After an unsuccessful attempt to open the locked toyota door, the dog could leave the unfortunate prison, followed by the call to 113, and the police patrol arrived in the parking lot about ten minutes later. Then the policeman and police went to the owner of the vehicle at the nearby shopping center and in the restaurant of the restaurant, then searched for fifteen minutes.

It turned out that the owner of the vehicle was at the other, more distant shopping center. She returned to the car and left the dog around 11.45, which means she was exposed to direct sunlight for at least 50 minutes. The dog was breathing very shallow and very fast, which was one of the main indicators that he was very hot.
Photo: Matic Tomsic


Parked in the shade, while the interior is now 31 degrees Celsius

Already in the car that was parked in the shade all the time, the air temperature during the call to the police is 31 degrees Celsius: 
At Siol.net, in August 2017, the car showed that the temperature in the interior of the vehicle extinguished with air conditioning switched off during sunburn may exceed exactly 40 degrees Celsius within ten minutes:


Car Fever: The greenhouse effect is lethal, how can the car be smoothed out effectively? #video


Employee: Right, that you called us

As the dog did not seem to be wrong, the police were his mistress who protested their presence because "not only a very short time" and "the dog had open windows", he uttered only an oral warning. ,

Later, the police officer in charge of the procedure explained that telephone calls were encouraged in such cases, 113 but the police, using force, opening a car to cause material damage, only measures to prevent the death of the animals.

In the present case, there is no valid reason to use force as the dog still shows normal signs of life. Learn more about the powers and advice of the police to save hot dog dogs, In the vicinity of Maribor, police were also sent on Saturday for a dog that had been locked in a sun vehicle for more than two hours.
Photo: Police


She will leave the dog in a car that is broken, will have to pay 800 euros (video)


Veterinarian: The dog can be fatal for only twenty minutes in a hot car

Heat stroke in the case of a dog enclosed in a burning sun parked by car, although it has a dropped glass, it can take fifteen to twenty minutes, but it can lead to lasting health effects or even death, Žiga Žgank, "Fallen dogs do not help the dog, although many still believe in it," says Jagk.

Dogs regulate body temperature through the oral cavity by lengthening the tongue from which money is poured and deep breathing. The air in the car that is exposed to the sun is not only getting hotter but also getting wetter. Thus, dogs emit excess heat less efficiently, which leads to an increase in their body temperature, explains Žgank. Symptoms after which a heat stroke is recognized in the dog are, among other things, red tongue and wrecks, breathing very quickly and in the air, dense saliva, dizziness, diarrhea and depression or lack of gossip response. The recovery of a dog after a heat stroke is long, the replacement of lost body fluids usually lasts for two or three days, explained Veteran Zhiga Jingk.
Photo: Matic Tomsic

Due to the increased rate, blood pressure is also increasing, blood vessels expand and blood pressure drops, which, along with the gradual loss of body fluid due to accelerated breathing, results in further increase in body temperature. Although such cases are much less common, spending time with hot cars is far more than a cat sensitive to dogs.
Photo: Pixabay


If body temperature rises above 41 degrees Celsius, kidneys, liver and other organs may be left behind, drainage of the brain, the risk of blood clots and bacterial infection due to gastrointestinal damage is "High," explains Žgank.

According to Zrinka, heat strokes are particularly susceptible to older dogs and dogs with existing health problems such as malfunction or organ illnesses.


Do not forget about animal #video on hot days

Attention: The overheated dog should be cooled down gradually We should not force the dog to drink water, but we only offer it to him when he drinks, he will decide for himself, the vet advises.
Photo: Pixabay

The dog, which has been locked for a long time in a hot car, should never be cooled by full watering with cold water, warns Zhiga Jogan.

As a man the dog may experience a shock that can even cause death in the worst case. Cool the dog with a water jet, starting with the hind legs and gradually moving towards the head.


Warning on hot days: jump into cold water can be very dangerous


Whatever you do if your car shows a helpline


In a parked car in Zagreb it measures 74 degrees Celsius


What is the heat stroke and how do you recognize it?


The Croatian girl, who is left in the car by her father in the heat, dies


It was so hot that air conditioning systems were also ruined