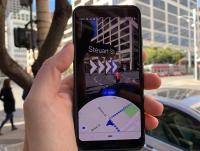 Slo-Tech – Just a few years ago Google just hinted that it could get a version of Google Maps with enriched reality when it showed Google's May I / O event how it can be seen. Now comes the happy reality, as The Wall Street Journal was able to test it very much.

The idea is simple and enough technology needs to be developed to achieve this. Instead of looking at the map over the phone and finding out in which direction we should go east, the phone can show us the direction of life. When we turn on the new Google Maps feature, the camera phone captures the surroundings and displays a screenshot that adds billboards. In this way, the phone knows exactly where we are – the classic ways are GPS, Wi-Fi and base station data, and now Google Maps gets another fourth piece of information, photos from the surrounding area. By looking at all available Google Maps data, find out where we are and where we are.

The application is not intended for permanent use, as walking during bulging in the phone is dangerous, which the phone itself even warns us about. It is very useful when we need to be oriented and when we get to some unknown split element. It is primarily designed for pedestrians, although the technology is similar to that of self-propelled vehicles. However, they emphasize that the new service is still not ready for commercial use and that closed beta tests are currently underway. But once it will be available to all.