Slovenian from Shanghai: If a business opportunity is offered, I will use it and stay 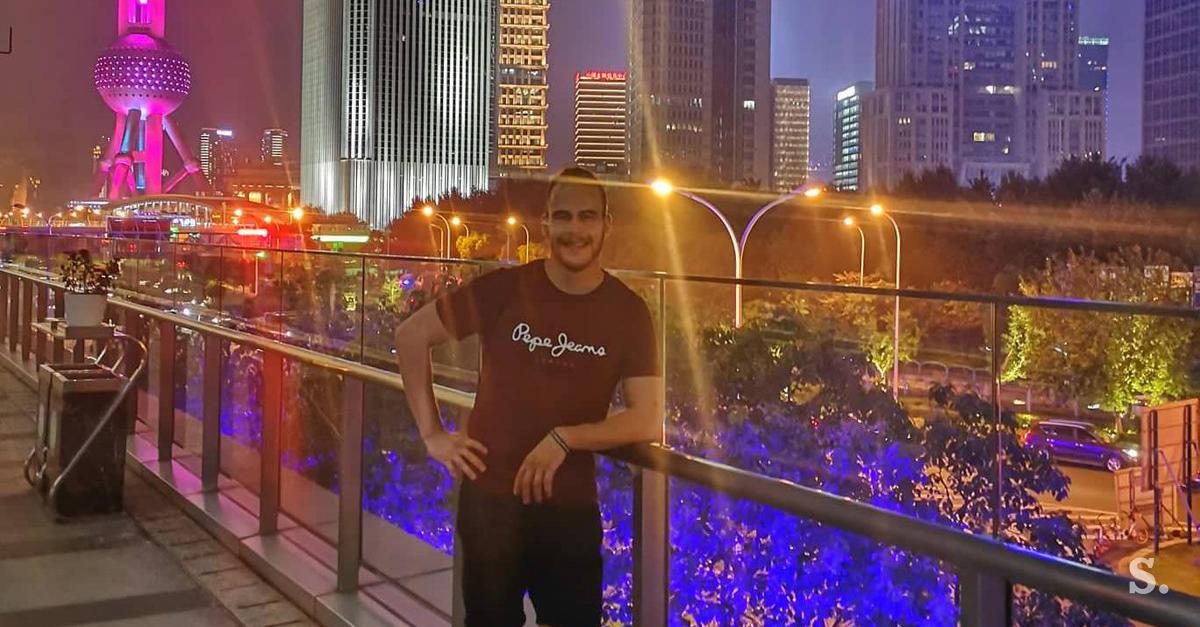 Some in the Slovenian, others on the Croatian coast and also find someone who spends this holiday longer than home. Whether it's a clean vacation or a job, there are so many programs today that if it's time and money, it's hard to decide where to go. One of the opportunities offered to students is the summer school. 27-year-old Jan Dejman, who will be in Shanghai for China for a month, decides this.

A student from the first year of Master's degree in the Faculty of Administration is currently employed at the International Office of the Student Organization of the University of Ljubljana. "We are primarily helping foreign students coming to Slovenia to get more involved in society and get used to living with us," he says.

At the end of my studies, I would like to work in an international company because I have always been interested in work that involves cooperation beyond the borders of Slovenia. She likes to spend her free time traveling and discovering new things. Although he has traveled most of the world, he has never been to Asia and that's why he decided to spend this summer at a Shanghai summer school. 
From Chinese lessons to learning the everyday life of locals

At present, this is a half-month long program in which a Chinese language course is organized. "We have courses from Monday to Friday, every day for three hours," says Ljubljančan. Lessons are divided into six different levels – from perfect beginners to those who already speak Chinese. 
They teach both writing and speaking, the first is harder, Jan. "Somehow we will talk and the characters are …" she says. Otherwise, the locals are mostly understood by gestures. "The Chinese also do not understand English well," he adds.

Jan is not the only Slovenian who decided this summer for a summer school in Shanghai. With a group of Slovenes who currently have about 7,200 kilometers air distance from home, they have already joined before coming to China. "We are all housed in the same dormitory, so we're even more connected," he says.


Slovenian in the Netherlands: I received a whole new impetus for life


"Before we arrived in Shanghai, we had a transfer to Urumqi, near the Chinese border with Kazakhstan." Our staff spoke in Chinese and drove us to a 30-year bus without telling us where we were going, "says Yan.
The driver escorted them to the entrance of the hotel where they were carefully inspected. "Then somehow they told us we could wait for the next flight, we rested a little and then took us back to the airport in the afternoon," explains Jan's unusual experience.

In addition, students from 26 different countries also participate in lectures and seminars on Chinese culture, business and everyday life. "We learned Chinese calligraphy, made dumplings (a typical Chinese dish) and made a bicycle, and many things are coming, we are only half the program," Yan said. 
The site also offers a number of daily excursions that offer participants a wider view of Asian culture.


The Motdea winner, who works in the Ferrari F1 team


For the program they will take 1490 euros

The cost of the program is 1490 euros, including all lectures, seminars and accommodation. "However, the costs were partly covered by a 900-euro scholarship," Yan says.

At the end of the program, participants will have to pass the exam, which will bring them three credit points that can be redeemed at the home faculty. "If you do not pass a Chinese exam, you have to return the scholarship," explains Dejman. 
"I myself had to pay a plane ticket and pay the visa fee," he added. But life in China is not expensive, everyday needs and food are cheaper than in Slovenia. "You can find normal food in the restaurant for about 4 euros," she says.

"This is a completely different way of life"

The biggest advantage compared to Slovenia, which Jan noticed quite quickly, is the very well organized traffic connection. "I was surprised that there was no traffic jam anywhere, either on the road or in the subway, even considering Shanghai is a 25 million city," Yan explains.

On the other hand, pollution and waste disposal are a major drawback. "The city is pretty dirty," said the 27-year-old. 
Besides, it was interrupted by cameras that accompany you at every step. "You're always under surveillance because the cameras are everywhere," he explains.

The Chinese are a very labor-intensive nation

In comparison to the Slovenians, the Chinese consider him to be a ruthless nation. "From morning till late night, they are doing something," he noted.

"But they are more closed to tourists and the rest of the world, and the result is also ignorance of English and other cultures," he adds.

He did not think of moving to China before the program, but said that finding a job would probably not be a problem. "Shanghai is a huge city, so there is no shortage of any kind of employment," he says. 
At the end of the program, it ends in mid-August, he will return to Slovenia. "I'm very fond of friends and I live in my home country," he explains.

"But if I could be offered a business opportunity at the time, I would be happy to use it and stay in China," he added quickly.


Yan's stay abroad recommends. "If you love a dynamic lifestyle and everyday challenges, Shanghai is certainly the right place for you," he says.

For those who want to spend their vacation in learning something new while having fun and learning new cultures, summer schools are a great idea. If not this year, this is certainly one of the options for next summer.