The government has an unpublished report on family reunification 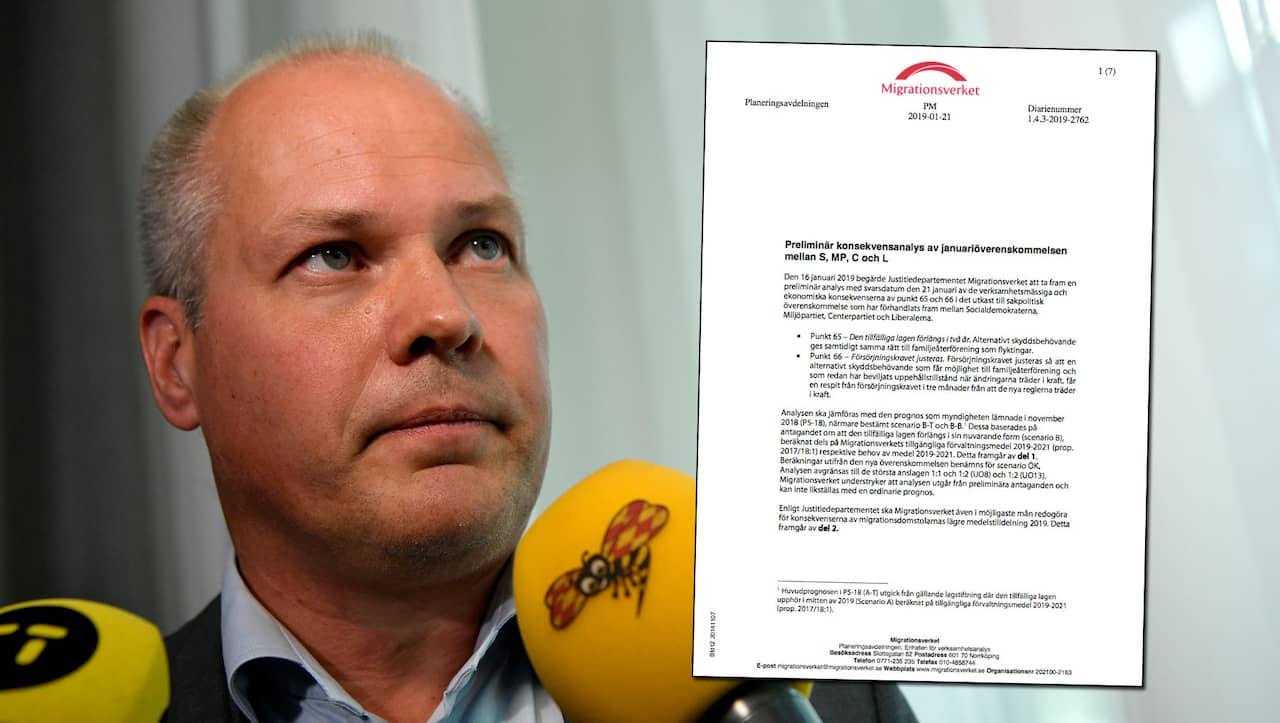 This summer, the government has been sharply criticized since it turned out that the Migration Board was asked to submit one of its forecasts on Sunday. Critics say they are trying to diminish the amount of immigration.

Now Expressen may reveal that the Migration Board has submitted new data on family reunification to the Justice Department on Monday. But these figures are not presented, and the recently appointed Migration Minister Morgan Johansson continues to refer to an old forecast for a week.

Only 25 minutes after the president announced that Stefan Loofen would be nominated as Prime Minister, a government official sent a letter to the Migration Board. In the e-mail message Expressen noted, the official mandates to assess the impact of new, more generous family reunification rules.

The ministry wants the analysis to be transmitted no later than five days later.

"The Ministry of Justice will need assistance in the preliminary analysis of the operational and financial implications of paragraphs 65 and 66 (see Formulation below) in the draft political agreement agreed between S, MP, C and L.

What financial and operational changes are made by the proposals compared to the forecast provided by the Authority in November 2018 (scenario B-T and B-B)? Thankful for the allocation of grants and years and, if possible, also what consequences results in the lower average allocation of the courts for 2019

We will need your analysis by Monday, January 21st. If you have questions about the order, please contact me. "

On Friday, Stefan Loofwen was elected prime minister. On Monday, he read the government statement and presented ministers to the new government – including Morgan Johansson, who became Justice and Migration Minister.

That same evening, at 8.20 pm, the Migration Board issued the commissioned assessment of the impact of family reunification on government departments.

Since then, several times, Morgan Johansson has been interviewed about new family reunification rules, but continues to refer to the autumn analysis of the migration council, where estimates of spending and number of residence permits are significantly lower than in the new analysis.

According to the old forecast of September 2018, a total of 7 700 relatives will be granted a residence permit and will move to Sweden in the years 2019-2021. followed by more generous family reunification rules.

The proposal to extend the right to family reunification

In the temporary Asylum Act, which came into force in 2016, the right to family reunification was alternatively abolished.

With the new agreement between the S, MP, C and L, they get back the right to family reunification.

This means that the nuclear families of these people – real spouses, spouses, registered cohabitants and minors – are already entitled to a temporary residence permit in Sweden.

Alternative protection needs include those who are at serious risk of armed conflict in their home country, but also those at risk of capital punishment or torture upon return.

Many asylum seekers from both Syria and Afghanistan are classified as alternatives to the need for protection.

But in the analysis that the Migration Council presented on Monday, the figure is 10,100, provided the Migration Board receives the requests they want.

This corresponds to an increase of just over 30% compared to the old forecast – a total of 2 400 more residence permits and relatives over the next three years.

The Swedish Migration Board then expects that not all relatives who are granted a residence permit actually move to Sweden. The value of the number of more residence permits over the next three years is instead of 11 900, provided that the migration board has the necessary resources.

When Expressen interviewed Morgan Johansson on Tuesday, the day after his ministry received the new analysis from the Migration Board, he still mentioned the old forecast.

– This is the overall assessment. For 8,000 in three years, then you also know how the figures look. This 8000 for three years is a group that is clearly manageable. I think they (the Swedish Migration Council) use the words marginal effects seven or eight times (in the September 2018 forecast), then said Morgan Johansson.

When he commented on how much more people are expected to apply for asylum in Sweden as a result of the new rules, it becomes clear that he is talking about the September analysis:

– The Swedish Migration Council has made decisions, especially if it means more people will come here. And last fall, they made an assessment, which showed that they meant very, very insignificant consequences of such a change.

His department then had access to the new analysis for 17 hours.

Three days later, he was questioned at Nijmezmoron

Three and a half days after the ministry received the new analysis, Johansson also took part in the news of TV4 News Morning – in a debate with Paula Beiler's family policy spokesperson on family reunification.

"What we are talking about is an increase of about 8,000 for three years. On average about 3,000 more per year, Morgan Johansson says in the program.

The TV4 reporter once again asked about 8,000 people.

He also points to the figure in Twitter in response to a person who linked Expressen's earlier publication on family reunification:

In an article by TT on family reunification, which was published on Thursday afternoon, the issue is 8,400 more residence permits.

This figure can be found in the new unpublished report, but describes a scenario where the Migration Board does not receive the necessary resources but can continue to operate in line with the recently adopted M / C budget that reduces the appropriations for the Migration Board studies.

The Migration Board also clarifies that the amount of appropriations for the Authority does not affect the total number of permits issued, but the lower figure of 8 400 is due to the fact that much of the tests have been postponed to the future in this scenario:

"The difference between the ÖK-T (Available Funds) Scenario and the ÖK-B (necessity) depends on the Migration Board's investigative capacity. The ÖK-B scenario reflects how change will look if more testing resources are available. The number of expected residence and accommodation permits is not lower in the ÖK-T scenario, but the decision of many cases is transferred to 2022 due to the long waiting hours. "

The new rules mean that people who have been granted asylum for the foundation or who need protection – for example, Syrians who have fled the war in their home country – are again entitled to family reunification. The right is abolished when the temporary Asylum Act enters into force in 2016.

Expressen calculations show that more than 20,000 people who previously were not entitled to family reunification when introducing the new rules.

READ MORE: Migration Council: Sweden is becoming one of the most generous countries in the EU

Quarterly leave on the delivery requirement

The postponement is also applied retroactively to all alternative persons in need of protection who have not been entitled to family reunification in the last two years.

• This means that none of the 20,000 people will be required to obtain a residence permit for their relatives. They do not need to be able to support themselves or their loved ones.

That while relatives apply for a residence permit within three months of the entry into force of the new rules.

During the interview Tuesday, these calculations were presented to Morgan Johansson.

Expressen asked Johansson how the Justice Department can be assured that so few of these 20,000 people will use the new right to family reunification:

At the same time, they themselves (the Migration Council) say these figures are very preliminary and very uncertain. However, there are 20 000 people who have been granted a residence permit on grounds of, or need for protection, who now, overnight, have a new family reunification opportunity they have not had before. How do you know there is not much more?

"Yes, partly because of what I've been to before. By changing the law, people also change their behavior. So there are many, many families come. And they will not talk about family reunion.

The analysis on Monday of the Migration Board contains a completely new letter that potentially covers a large proportion of 20,000 people:

"The calculation shall take into account candidates who have been or are expected to be refused to apply for a residence permit due to accession under the Temporary Act and which are supposed to be reapplied in the second half of 2019. limitations ".

When the rules were changed in 2016, in most cases, alternative defenders lost their right to family reunification.

The Swedish Migration Council's analyzes include only relatives who, despite the new rules, have applied for a residence permit in the past two years and are rejected.

People who know the new rules and therefore have not even applied are not included in the analysis and are thus a potential dark.

This also does not mention Morgan Johansson when he was interviewed by Expressen, although it is evident from the new Migration Board's analysis.

The Migration Council also predicted higher spending in Monday's analysis as a result of the new family reunification rules.

In the September 2018 analysis, the total cost of generous family reunification was estimated at SEK 910 million in the years 2019-2021. This includes both the agency's own funding and the increased resources for municipalities.

But in the new analysis, the forecast has been raised to SEK 1,365 billion for the same period, which corresponds to an increase of 50 percent compared to the old analysis.

This is also not mentioned.