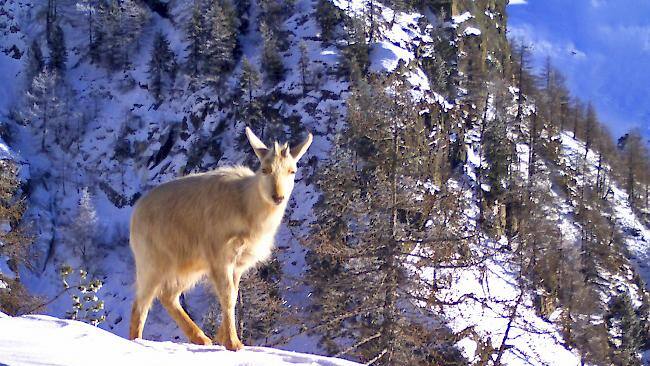 A rare white chamois wanders over the mountains of Upper Valley. The president of Jagdschiessverein now warns of the consequences of the shooting.

In the mountains of Upper Valley, the game camera, which was actually created for wolves, made a spectacular shot. In the picture you can see Gamskits, who walks through the snow with his mother. The special feature: his coat is completely white – rarity. According to Walliser Bote, the animal was first seen in the summer of last year.

Peter Scheibler, manager of the hunting hunt of the canton of Valais, says that every year they see about five to six goats in a lightweight coat. The whole white is extraordinary. However, you can not talk about albino because it does not have red eyes.

Appeal to all hunters

"By law, such animals are not protected from being dropped. But if the responsible fisherman tries to save such specimens, we have no problem with him, "says Peter Schaumbler. Anonymous ranger even urged pastoralists not to hunt for the rare wild goat.

In 2012, contrary to all recommendations, a Valet hunter killed a similar animal (reported by Blick). Launch was allowed, but criticism was fierce, says Florian Eggel, president of the Oberwalliser Jagdschiessvereins, to look. – This is not a trophy! Such a wild goat can live like that. "Those who do not adhere to it are considered to be banned among hunters. At that time, the shooter also felt that. If she wanted to sit in a pickle on the table, they all stood up.

Since Gamskitz currently moves in a protected area, it is largely safe. In addition, the hunting season begins in autumn.