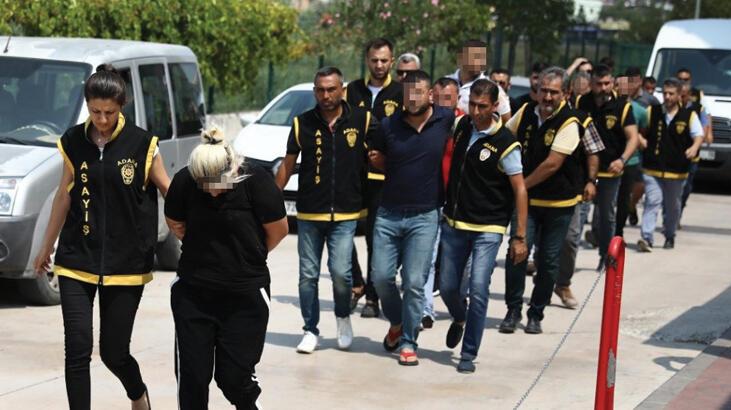 The incident took place on June 25, at Karatash Ureir Street. Burak Ekinchi, the security manager for the logistics and security company, which translates dollars and euros to bankers and businessmen, has taken action to make the 9 million-euro transfer with his team. 9 Million Sacks at 4 Million 795 Thousands (Approximately 31.5 Million Pounds) A 2-armored car that loads Ekinci's staff, "It's like missing money. Go fetch other bags, I'll check them out," he said . When the officers got up, they did not see Burak Ekinchi. They waited for a while, the officers stole the money, police said

Security cameras have been reviewed by the teams of the Public Security Directorate. Police, Burak Ekincinin, took the money, fled with a decisive luxury car. Vehicle number found abandoned. Extension Bureau teams set up by the special team reportedly planned the robbery of Atilla Can O., Mehmet G., Ahmet K., Engin K., Tuncay B., and Abdulsamet B., which were captured last month. Atilla Can Ö., Mehmet G. and Ahmet K. were arrested after being sent to court. The other three suspects were released subject to judicial review.

Gohan B. and his brother Serkan B. were also caught in the house they were hiding. Serkan B. of 2 brothers completed the applications, was arrested. Gokhan B. was released on judicial review. Burak Ekinchi was captured by a special team on July 30 at a house he was hiding in Gultepe district of Sarikam district.

He also stated that he hid in a shelter in Menekse district of Lukurova district that he could not go out and was afraid to eat even though there was money.

Ekintzi, who claims his associates gave him € 150,000 and did not call again, said he regretted it. Then Burak Ekinchi and Jail E., Berkay E. Serdal K. Tolga J. Hassan Y. and Ayhan Ö. was detained. The suspects in Burak Ekinchi, who were sent to court after questioning by the police, Jal E., Serdal K. were arrested, others were released subject to judicial review. Statement by Eckinchi: "On June 22, a state bank to transfer money to 4 ATMs. Cengiz K. I worked with, I said ATMs to deposit £ 395,000 incompletely. When the money was deposited missing, the theft appeared and my company started an audit. I asked my relative Mehmet Emin G. for a very urgent debt of £ 400,000 When I finished investigating, I realized that I was innocent and said that they would repay this money.

Earlier this week, a large amount of money transfers were made, Ekinchi said, "After receiving the money to flee to Georgia very quickly. Until they realized, we would be abroad. However, the bill at home did not fit the market," he said. The number of detainees has reached 7 robberies, so far, police have stolen 73,000 euros and seized 82,000 540 pounds.

Hassan B. and Mehmet Emin G. 4 million 700 thousand euros involved in police losses they are attempting to capture, Burakt Ekinci's under the spotlight of a nearby environment. As a result of the follow-up, it was found that Eckinchi was giving money to his relatives.

Then the brothers of Hassan B. Tunkai B. (24), Muslim B. (23), Qadir B. (18) and friends of Batukhan Ç. (22) and Murt (25) learned that he was leaving for a vacation in Mersin. The suspects who rented luxury vehicles were caught following. 43,000 365 pounds over suspects have been seized. The suspects, who did not say the source of the money, were taken to a safe place for questioning. Hassan B. also his sister Pinar B. (32) of the jeweler 81 thousand 860 pounds of gold and 25 thousand pounds were ordered to receive two mobile phones. After questioning, the suspects are sent to court.

The investigation is ongoing.