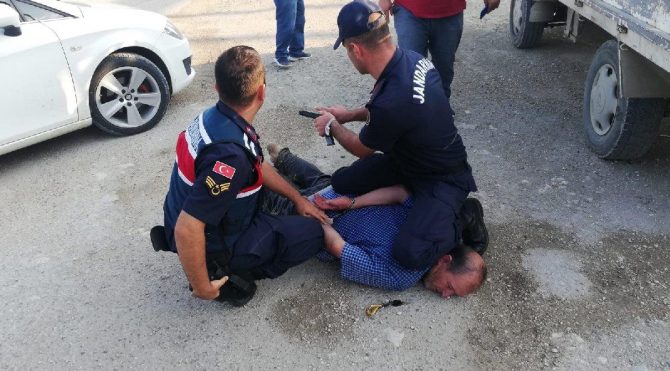 Ramazan Duyan, who is a farmer in Antalya, began living with Asie Idogmush in 2013. Asie Aidogmus has settled in her father's house in the village of Çetince on Yalvach. Ramazan Duyan arrived in the village on the afternoon of August 15 to meet with Assie Aidogmush, who did not return despite his insistence. Ramazan Duyan, qualifying at 5.30pm, Isparta-Asie Aydogmush and Ashan Aydogmush at Ashadzhova's position on the way to Konya went to their father.

Between Ramadan Dwan and Asie Idogmush, he allegedly left for the return home debate. Orhan Aydogmush is the father of the debate on the growth of intervention. After a short melee, Ramazan Duyan left the scene, and Asie Idogmush phoned the village chief, Aishe Adiguzel, and informed him of the situation.

CLOSED TO IT MORE

Shortly thereafter, Ayche Adigüzel and her husband, Homer Adügüzel, came to the site. Meanwhile, Ramazan Duyan, who returned with a rifle in his hand, shot Orhan Idogmush sitting in front of the house. Orhan Aidogmush rained blood on the ground, and Ramazan Duyan, who continued to shoot, also shot and killed chief Ayse Adiguzel, who tried to prevent him. Ramadan Duyan, who decided to leave the scene, fired two shots at his wife, Assie Aidogmush, who came from the kitchen of the house and imprisoned her father for a religious wedding. 3 people lost their lives after the Ramadan Dwan event, arrived at the scene, fled with his truck. Ayes Adigüzel's wife, Ömer Adigüzel, who survived accidentally, was sent to the gendarmerie and medical teams.

Gendarmerie teams in the village of Gelendost were arrested as a result of his work, near Ramazan Dwan village, and Asie Aidogmush, father Orhan Aidogmush and village chief Aishe Adiguzel were buried yesterday after the burial in the cemetery.

Ayes Adiguzel's wife, Homer Adigusel, the head of the village of Cetinze, told the Demirören News Agency (DHA) about the horrors in his life. Ömer Adıgüzel, stating that Ramazan Dwan survived the massacre by acting as dead, said: “The villain scans us with a shotgun. I fell to my wife, pretending to be dead. Otherwise, I would have been the target of the bullets. "

"THE LIVING CONDITION BY THE PHONE GEN GEL

Asiye Aydoğmuş, sitting at home looking for his wife on the phone, Omar Adiguzel, said: "Asiye Aydoğmuş's husband came, argued with him, they complained but could not be found in the house in the garden, so they wanted to come to help. My wife wanted to go electric. I said, em, I'm not going to send you there myself. I'll take it with a car. "We went to the garden house 1 kilometer from the village. I parked my car on the Isparta – Konya highway with the lights on. Then I went with my wife, Asie Aidogmush, and her father," he said.

D Gone, come back with a shotgun "

When they got home, Asie Idogmush said his wife went to Omar Adiguzel and said, "We were sitting on the grass in the garden. 5 minutes later, Ramazan Duyan came in with a shotgun. He started shooting one after the other. Orhan Aydoğmuş was shot dead for the first time. Then my wife fell to the floor. I thought he was throwing himself on the ground so he wouldn't aim at bullets. This time he pointed his gun at me. I fell to my wife and pretended to be dead. At that moment I realized that my wife had blood and was shot. "

"The bullets came one after the other," said Ömer Adıgüzel.

Ramazan Dwan turned to the other side. While suppressing my wife's bleeding wound, I called 112 on the other side. The gendarmerie could not find the scene and went to the village of Bakhtiar. Asan Aydoğmuş went out and shut up with his father. Seeing this, Ramazan Duyan returned and fired two shots at him. Then he walked away from the place. "

"THE LIVING MUST BE UNSECURED as a Martyr EV

Yomer Adiguzel noted that his wife had been working as a flycatcher for 20 years and said: "My wife died while he worked as a flycatcher. He was there to help the law enforcement. We are not related to the dead and to the killing side. He was there for his mission and he died for her. I want my wife to be a martyr for my three orphaned grandchildren. My wife works hard for them. "

Kenan Dogulu Says They Will Divorce His Wife Beren Saat