They climbed on the stopped ambulance so it wouldn't fall. 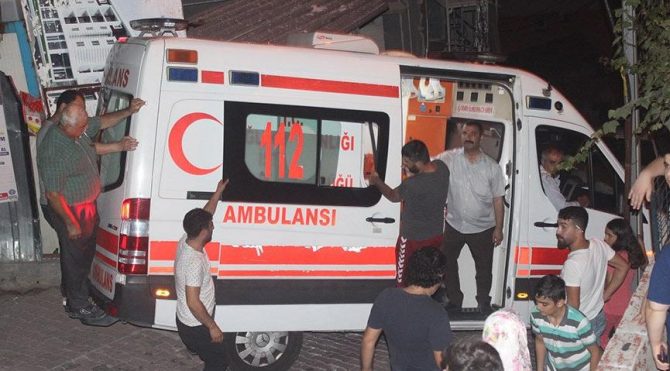 The incident occurred at 8.30pm on the Akasia Street in the Hurriyet neighborhood. According to the information received, a patient taken to the hospital at 112 Booklum Street, a leader of the ambulance ambulance, wanted to maneuver to the left of the intersection on Akasia Street.

An ambulance, the road is sloping and left to left because of the narrow suspension. Despite all the efforts of the driver, he could not get out of the congestion and the danger of withdrawing the help from relatives on the ambulance and the residents of the street ran to the rescue. As the patients' relatives sat in the driver's seat of the ambulance, several people on the street were heavy, climbing back and side.

The firefighter from the scene to be reported to the news, ambulance on the street with the help of ropes connected by iron poles. After the ambulance was fixed, the patient was taken to a stretcher by medical teams. The ambulance was removed from the rope by a rope attached to a lifeguard attached to the fire department.

Önder Ataş, one of the residents of the street who tried to help the ambulance not collapse, said: “The ambulance has admitted patients. He couldn't save himself on his way down. The car was hanging. All the neighbors ran so that the ambulance did not fall. Thanks to them, nothing is important, ”he said.