When the side structure lived without a wall collapsed 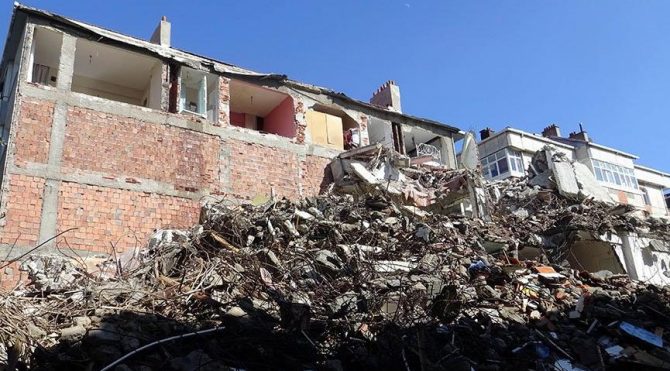 It may be affected by the Marble Earthquake as one of the areas shown in the Avchilard's central district by Ahmet Taner Kisalli, a 4-story Saray apartment has been renovated. Residents have agreed with a contractor to renovate their homes.

When the neighboring building collapsed, it became clear that there were no walls. Photo: DHA

The company began demolishing the old building with construction equipment. An interesting fact came to light with the destruction. It was revealed that there were no walls adjacent to the demolished building on the outside of the two apartments on the 4th floor of the Gwen apartment, and that the builder used the wall of the neighboring Saray apartment to save material.

A vigilant contractor uses the sidewall of a building to steal material. Photo: DHA

Homeowners Hatice Objective and Mehmet Arif Sarika, the walls of their homes, passers-by in the bedroom, living room and bathrooms when they saw the interior and wondered what they would do, he said.

Lockman Arslan, the contractor's engineer, said, ibi The owner of this building used the wall of the building we had demolished instead of covering the top floor. When we destroyed the building, it turned out to be such an unpleasant situation. We will cover the walls of our neighbors so that they do not suffer, we will make paint for painting and we will deliver it. "

The side-building company has promised to build walls for landlords who are in trouble. Photo: DHA