Cinemina is a platform that celebrates talent for content and sponsors 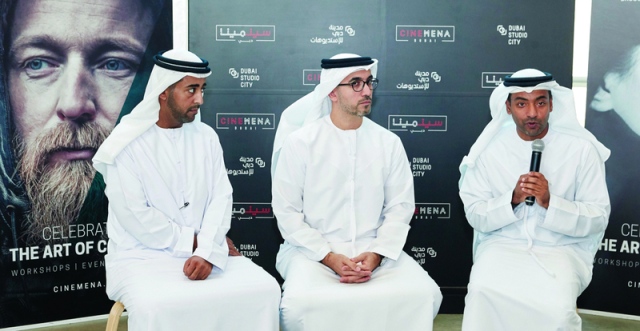 Dubai Studio City, the leading business, TV, radio, production, and events community, today announced the launch of Cinemina, a unique platform that celebrates the art of content and nurture local talent in all aspects of content creation.

It is scheduled to begin officially in February 2019. It seeks opportunities to create networks for stakeholders and creative community members.

This initiative will include many activities, including an exhibition of state-of-the-art technologies and trends, outdoor films and reflection sessions that focus on all aspects of art and craft in content creation. The initiative was announced at a press conference yesterday in the In5 building featuring Majid Al Suwaidi, Dubai City Media General Manager, Dubai Studio City, Dubai Productions City, Jamal Al Sharif, Chairman of the Dubai Film and Television Commission and Mohammed Salem, Executive director of Beahid The Sessions. Scene "and general manager of the" Cinmena "platform.

The initiative will support young talents to improve their creative skills through a number of annual events, including seminars and training sessions offered by a number of industry leaders as well as actors and directors.

"In line with our core priorities of promoting an innovative society by identifying and supporting media talent and creating content, we are proud to announce the launch of the Cinemina initiative, a new platform for media excellence in the region," said Majid Al Suwaidi.

Support for the sector

"More than 10 years ago, the role of the region in the content creation industry has certainly grown and we intend to provide all opportunities to support local talent." CINEMINA is an important step in creating a platform that allows creators to learn, inspire and communicate at all levels.

This will be useful for anyone who aspires to creativity, whether it be a cinema, a screenplay, or even before and after production. This initiative will enable young people to showcase their talent while supporting the content creation sector in the region and encouraging greater creativity among individuals. "

"Over the past three years, Dubai Studio City has organized a number of successful workshops with more than 2,000 participants, and in 2018 Dubai Studio City hosted 12 seminars in collaboration with the UAE backstage production company at Media5 in Dubai Production City, entrepreneurs and emerging media companies.

Workshops included topics such as sound recording, cinematography, voice, speech, post-production and production, and were run by a number of award-winning specialists.

Majid Al Suwaidi stressed that CINMENA's initiative combines all ages and experiences as one can participate in it, be it a beginner or a professional expert, and provide the participants with the tools and training needed to acquire new skills and produce content. The Middle East and North Africa are comparatively low worldwide and we expect the Cinmina initiative to be significantly improved and to encourage the creation of more content locally both in Arabic and English.We strive to bring together people who want to learn and create content, communication and discussion among members of the creative community.