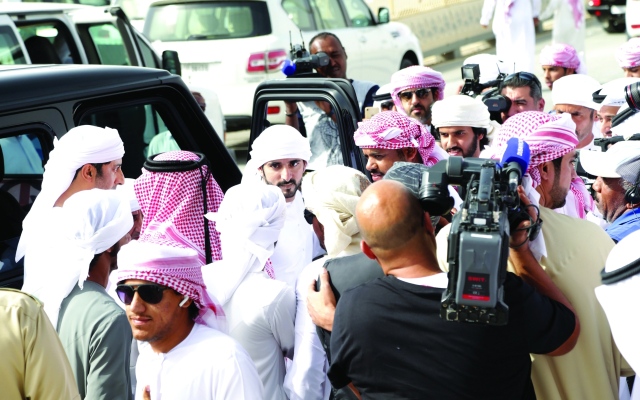 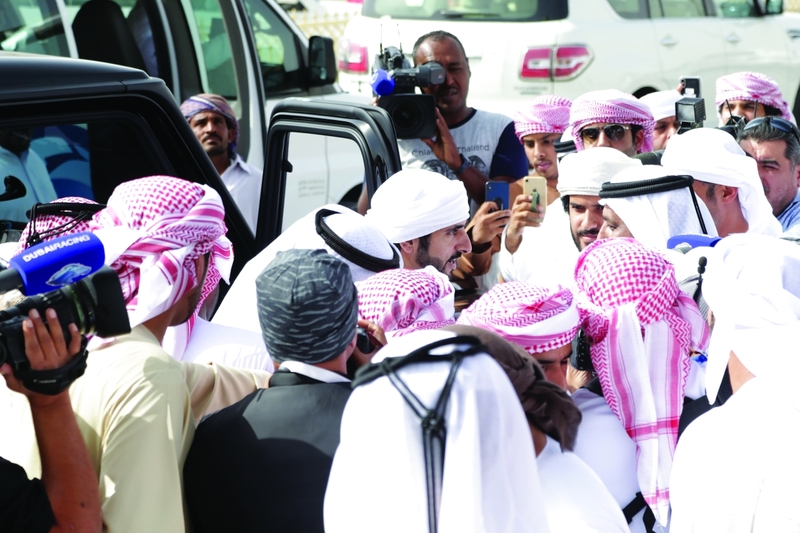 Abdul Aziz Saif Ali Suilem Al Kubi's "crown" is recorded for 7.21.3 minutes and is third. Mohamed Darui al-Amyri's Rainbow Control recorded a time of 7.21.5 minutes. In the second half, Metteb gave the owner on the open bench in the second half a shotgun of his owner, Mohammed Obye Id Al Mansuri, recording a time of 7.21.3 min. Second, Yassar came to Mohamed bin Nasra al-Ameri for 7.21.9 minutes. »Mubarak Ahmed Matar Al-Heyley records a time of 7.22.9 minutes.

Shaheen was kidnapped by Saif Dahbah bin Zafna al-Afari from the "Open Cannon" gun of his owner, recording 7.22.4 minutes and the second place being Shami by Mohammed Sultan Matar Mirkhan Al-Kutbi from 7.24.9 minutes. Muzaffar Mohammed Al Ameri recorded a time of 7.26.2 minutes.

Shaheen scored Seventh Away for Abdullah Mohammed Suhail, with 7.22.2 minutes and Al-Wathba took the lead in the 17th half for Sahel Al-Baramli. Mubarak Al Ketby recorded a time of 7.24.9 minutes and ended the "panic" of evening wins in the eighteenth half of Nasser Mohamed Naser Mushait Al Marrie, recording a time of 7.23.4 minutes.

Returning to the morning races, the third day of the festival began at 22 steps in the morning, which was dedicated to the hybrid tribes in the nursing age at a distance of 5 km and 12 of them were designated for production, and for the other centers the winners received a car with four wheels. For the victory of the "weary" for Abdullah Hamad al-Amery in the first half of the first night at 7:25:80, until the event "happened" in favor of Hamad al-Wahabi at the beginning of the second half of the morning sweets in 7 , 30: 8 minutes and gave a "rare" title Al-Jadan is a favorite of Malik Salem Salem Talob Al-Deray at 7:25 minutes while Al-Mutawakil won Salem al-Coutby won the fourth round of Al-Djadan al-Qadhafi 7:25 minutes.

Al Bakker's fifth-place title was given to Mohamed Khalifa's Al Muhari in 7:29 and Jamil achieved the title of Al-Bakkar's sixth half in the seventh half of the match. 7: 24: 4 minutes and gathered to win the best time in the morning and became "tired" for Gamal Mubarak Alhajli for the eighth half of local Al-Jadan 7: 25: 7 and achieved "missiles" for the songs from the rain of Hali the top of the ninth half of the first 7: 26: 5 minutes and won Al-Faiha for Mohammed Rashid al-Suwaidi at the top of the tenth half of the morning buns in 7: 27: 7 minutes.

Al-Sanafi set off on the same path as Mohamed Abdullah al-Amirri won the second half of the local league in 7: 27: 2 minutes. Production for the morning.

For the remainder of the morning, Said Abdullah al-Shamsi's "privilege" won the 13th-quarter title of the first quarter of the season at 7:27:27 while Salam won the title of Abdul Aziz Face Al-Marri for the fourth half of the game, Mali gave of his owner Ali Khalifa al-Rumahati in the 15th half of Al-Jadal for 7: 27: 5 while Masoud Hamid al-Marrie won the title in the 16th half for al-Djadan al-Mujahidden at 7:31 minutes.

On the fourth day of the festival is the Czech Sheikh Hamdan bin Muhammad bin Rashid al Maktoum, the prince of Dubai, chairman of the Executive Council of the Arabic Camel Festival, celebrating the 35th anniversary of the festival. Dubai's Cup of Crown Prince will take place at the opening of the Cup and the winner will receive a 400,000 dirhams prize and the runner will receive a quarter of a dirhams, the third is 150,000 dirhams, and the fourth is 100. AED 1000 and AED 50,000 , followed by Shaw I Venice dedicated to Aldzhan, opened and awarded with the 300,000 Dirhama Arms Prize for the first winner and 150,000 Dirham for the runner and 100,000 Dirham for the third and 70,000 Dirham for the fourth and 40,000. Dirhama for the fifth.

After the two symbols, 13 steps are made for the first and second prize, and the winner in each wheel of the four-wheel drive, and the holders of the center are also awarded cash prizes from the second to the tenth, followed by four matches to complete the production of Bakar Jedan, each winner receives cash prizes for second to tenth place, and the number of cars on the fourth day is 17 cars.

The morning period, which begins at 7:00 am, includes 16 steps dedicated to Baccarat and Al-Djadan, local and local cash prizes for all stages. The first prize is awarded for each 20,000 AED part. Other awards are also awarded for second to tenth centers ranging from 15,000 to 4,000. AED.

The auction of the sixth Grammy-C personal production, conducted by the Dubai Camel Racing Club at the end of the Royal Prince's Festival in Dubai, ends today, the auction being held on Friday and dedicated to tribal orphans who come from the purest breeds.

His Excellency
Saif al-Afari: "Shaheen" is on schedule

Saif Dahabah Zafna Al-Afari was glad that Shaheen won a fourth-round rifle for the age of Al-Laqaya for the Open Production category and said Shaheen was on time and was lucky and fulfilled the expectations, especially after having a remarkable record after winning the big Zayed award. Recently in the capital Abu Dhabi, praising Shahin's performance and using the expensive symbol, despite strong competition on the ground.

Al-Aphari added that he looks forward to more victories in Al-Bakar's age of transmission and age in the following period, and thanks His Majesty Sheikh Hamdan bin Mohammed bin Rashid al-Maktoum, Prince of Dubai and Chairman of the Executive Council and Chairman of the Dubai Sporting Council. When the presence of His Highness is the greatest incentive for all camel owners and sports enthusiasts, sports parents and grandparents.

Al-Afari concluded that Dubai's Crown Prince's Festival is an exclusive station for all owners as the festival contributes to the promotion of buying and selling in this sport, which has a positive effect on the continuation of Asai's sport and its growth and development.

The change comes at the beginning of December as part of the festival that coincides with the opening of His Highness Sheikh Hamdan bin Mohammed bin Rashid Al Maktoum, the prince of Dubai, to give more time to the participants to learn and prepare for the race. Which is the only one of its kind in the world for the length and suitability of the passenger in addition to the appropriate climate associated with camel competitions in the country.