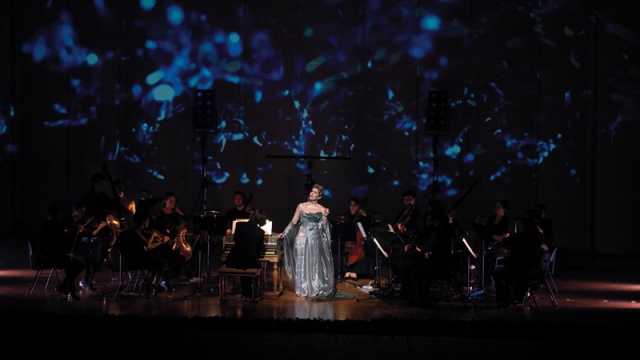 The ceremony was held under the patronage of Sheikh Nahayan Mubarak Al Nahayan, Minister of Tolerance, Huda Ibrahim Al-Hamis-Cano, Founder of Abu Dhabi, Culture and Arts Group, Founder and Artistic Director of Abu Dhabi Festival, and Italian Ambassador to Leoporio Stelino . For the first time, it was produced in the form of an album in 2016 and has an appealing appeal for world peace in our violent and conflicting era, by singer Metsuzo-Soprano and winning Grammy several times.

"The show is in line with the Declaration of Tolerance in 2019 that brings the message of tolerance, peace and human encounter with the arts as a means of development, sustainability and good for all people, regardless of culture or the state."

"We are proud of the Abu Dhabi Festival and we are proud of our global position as a creative emirate platform that celebrates the big stars in Abu Dhabi and draws on their rich experience and inspiration to inspire young people in the UAE and invest in their creativity and skills. Arabic, at the pre-festival festival in its 16th session, and on the stage of the capital of culture and the arts, Abu Dhabi ». Italian Ambassador to the United Arab Emirates, Leprio Stelino, said: "We are very proud and proud of seeing this constellation of Italian talent taking part in the events leading to the opening of Abu Dhabi 2019. The Italian Philharmonic Orchestra One of the most talented Italian music talents, and we are pleased from this concert in which Joyce de Donato presented some of the best operas of the Italian Baroque Opera ».

The main events of the festival this year will include a new collection of over 500 international artists from 17 countries including 18 specially commissioned composers, exclusive orders, co-production and other programs that will be presented through over 100 performances and performances. The first in the Arab world at 25 seats in Abu Dhabi and home to opera, ballet, orchestra, jazz and flamenco stars from all over the world. To embody the theme of this year's Defining Culture Festival, the Abu Dhabi Festival celebrates the owners of Al Hamam, the characters of the Abu Dhabi Special Olympics World Games, who have a torch of determination and challenge. As part of its annual arts and cultural feast and as part of its core mission of building cultural communication bridges and fostering dialogue among peoples, the 2019 Festival celebrates the cultural diversity and wealth of the Republic of Korea.

The main theme of the program is the 16 biggest stars, including the Korean National Ballet Company, Korea's first ballet institution and the Korean Symphony Orchestra. And Justin Cowlin, the award-winning American jazz and pianist. And Sir Brin Terfel, the famous opera singer who won the Grammy award five times. Sarah Paras is one of Flamenco's most famous and best dancers and choreographers in the world, and the main program of the festival ends with a show by the famous George Palanchin, presented by the Ballet Theater in Paris, the oldest ballet ensemble in the world.

The Abu Dhabi Festival is held for the first time in the Middle East and will be held this year under the theme "The Far Horizons: Works of European Nature, Liechtenstein Collectibles – Liechtenstein" and presents the princely collections of Liechtenstein, one of the most prestigious and special collections in Europe and the world. , Which includes works from the 15th and 19th centuries for leading artists

The Abu Dhabi Festival awards its annual award to the most influential figures in the world that enrich the arts and culture around the world and the Abu Dhabi 2019 festival is awarded to large and international names.

The Abu Dhabi Culture and Arts Festival will be launched in Abu Dhabi next year and will witness the return of young people to Abu Dhabi Festival, an interdisciplinary platform aimed at investing in youth from the Amir, which enables them to develop their skills and to meet their professional needs. Creativity and exploration of their future to effectively contribute to the progress and sustainability of the country's prosperity through many activities and activities, including the Fine Arts Education Program, the Young Cinematographers Course, the Thought Gallery and the Literary and Book Gallery. , And Tandem Marath, and the Fine Arts Award from the Abu Dhabi Gulf Capital Festival, as well as a prize for Innovation from culture and arts in the Gulf Arab Capital Abu Dhabi Group and the General Design Award, as well as the Hristo and Jean-Claude Award. The Abu Dhabi Festival's municipal program includes a variety of innovative and inspiring interactive events and activities, including art exhibitions, performances and workshops for all ages. Among the highlights are the Live Comedy Garden Festival, which offers two comedy shows in Um Al-Emarat Park.

They came to participate

Inspired under the slogan