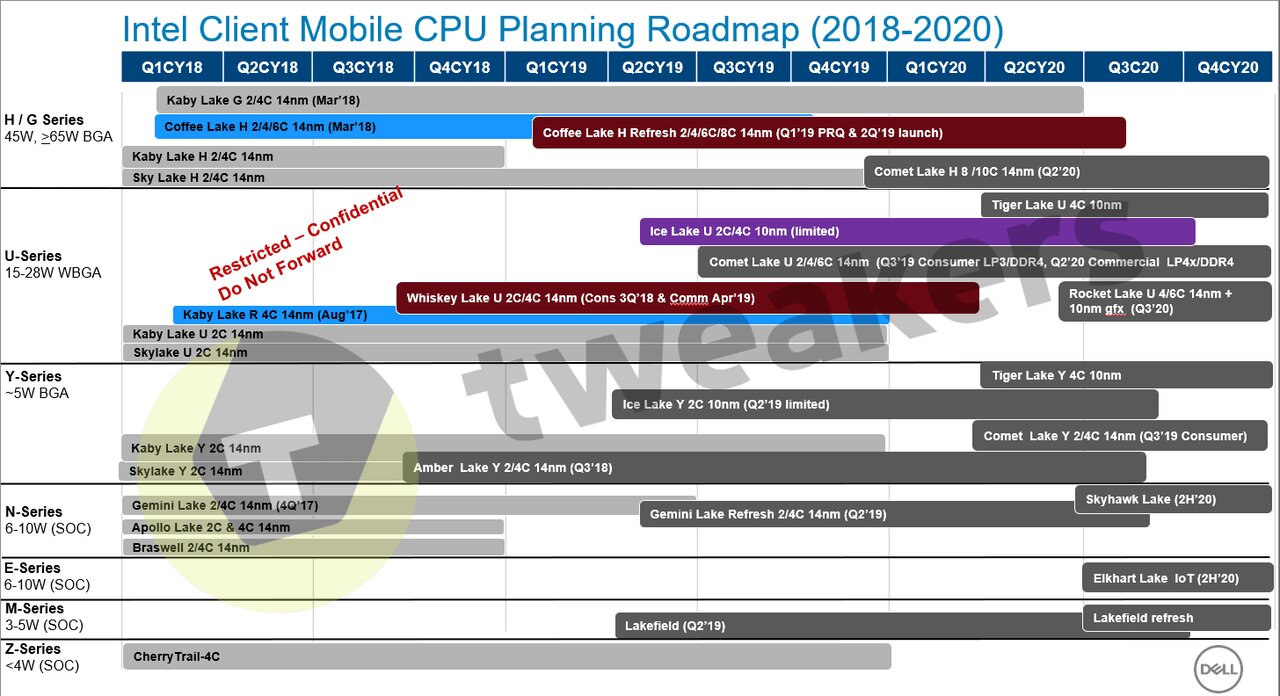 In the last two years, the market of x86-compliant processors is developing a fierce struggle between Intel and AMD. Meanwhile, the blue chip maker has doubled the number of cores in solid desktop platform solutions and seems to be starting to run desktop processors soon using 10nm process technology designed to compete with 7nm on Ryzen 3000 (Zen 2) .

According to the Intel roadmap, published by the Dutch Tweakers portal, it will take a long time before the first 10-nm Intel Core for desktops is released. The provided roadmap covers the period 2018-2021. and was on the net due to the negligence of one of the partners of the processor giant, the US company Dell.

In the coming months will be the premiere of the mobile processors Intel Ice Lake-Y and Ice Lake-U, performed on 10-nm lithography. The first chips will offer two cores with a rated heat pack of about 5 watts, while the second family will include 2- and 4-core processors with configurable TDP ranging from 15-28 watts. Both line solutions will be available in limited quantities.

A little later, Intel will update its range of single-chip Pentium Silver and Celeron chips, releasing the 14-nm Gemini Lake Refresh. They will offer two to four physical cores and will be used in laptops and mini-computers of the original level. In addition, there will be an energy-efficient SoC Lakefield built on the Foveros concept.

In the third quarter of this year, we expect a small revolution in the mobile device segment – a Comet Lake-U processor debut with a core of two to six. These chips feature heat packs of 15 to 28 watts, manufactured using an improved 14-nm technology and will be used in mass-market laptops. Perhaps the most interesting event with regard to PC enthusiasts is scheduled for the second quarter of next year. The current Intel Coffee Lake Refresh for laptops and desktops will be replaced by Comet Lake chips containing up to 10 physical cores. For their production, the corporation will use 14-nm technology standards, and in 2021 they will be replaced with 14-nm Rocket Lake solutions. Thus, the release of the first 10-nm desktop processors will take place not earlier than 2022.

Among the many Intel products mentioned in the roadmap, it is worth mentioning the Tiger Lake mobile processors, which mean a massive transition to 10-nm standards in the mobile segment, as well as the Xeon E of the Rocket Lake architecture that will support the PCI Express 4.0 .