Google Maps cards will have an amazing feature. 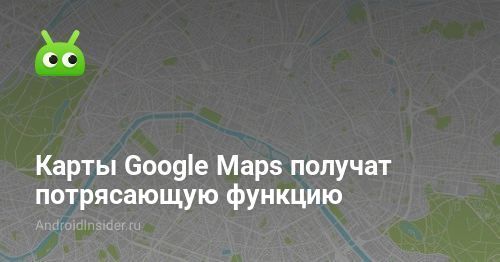 Google Maps is the most popular mapping service in the world. Yes, it is possible that the cards are far from the level of YouTube and other company services, but for many people they are an integral part of life. And this applies not only to the lovers of the trip. Google Maps is handy, but this plus can eliminate the fact that the company just does not care about the privacy of user data.

Earlier, Google had already captured the fact that it secretly collected geolocation data from users, and this applies not only to Google Maps but also to other services of the American giant. The company can not stay in the place of Facebook, which has recently been accused of spying on users, so the new Google Maps update introduced an interesting feature.

In the beta version of Google Maps 10.10 you can enable automatic removal of location data

In the new update, you can now automatically delete the user's traffic history. This feature is already present on maps but is manual – you can not enable automatic deletion. It is not known how often the data will be deleted. Most likely, the app organizes the session – when the user closes the program, it automatically deletes the cache.

On the scale of consumer monitoring, such a step is very small and clearly inadequate. The information Google and Facebook have for you is simply unlimited. And this despite the fact that even the universe has its limits. Jokes jokes, but in this regard, Apple is still happier, Cupertino much better cares for the privacy of its users.

Telegram keeps end-to-end encryption, so do not be afraid to subscribe to us in this sweet messenger.