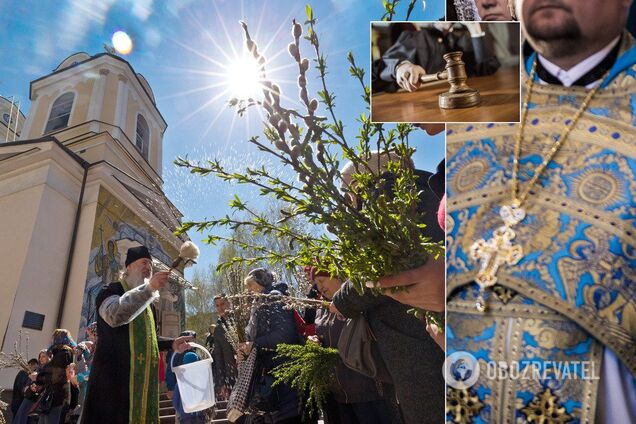 The District Administrative Court in Kiev has blocked the process of renaming the Ukrainian Orthodox Church to the Moscow Patriarchate. This was done a few days before the end of the mandate appointed by MEPs to change the name.

What does this mean and whether it can affect the Orthodox Church in Ukraine – understands the OBOZREVATEL.

What the court decided

The court temporarily terminated the re-nomination of the UCP-MJ in the ROC. This decision was taken on Monday, April 22. According to Themis, while the process is being considered by the Constitutional Court, it is wrong to change the name of the church.

"The execution of the act at issue (before the judgment of the case) and the execution of actions for its execution may lead to unjustified state interference in the sphere of activity of a religious organization as a legal entity," the statement said.

It is about appealing to several MPs from the "opposition bloc", in particular Vadim Novinski, Alexander Doljenkov and Vasily Nimchenko. MPs are required to declare an unconstitutional law amending Article 12 of the Ukrainian Law on Freedom of Conscience and Religious Organizations.

The fact is that after the announcement of the establishment of an Orthodox Church, Rada identified the UCP-MJ as the Russian Orthodox Church in Ukraine. In the opinion of some opposition MPs, the provisions of the law "are aimed at interference in the state in church affairs" and also "violate constitutional rights of citizens to freedom of worldview and religion."

In this regard, the court stressed that its decision does not indicate the actual settlement of the dispute. It is aimed at "conserving" the current state of affairs until the final decision of the SPC.

What will happen and what threatens PCC?

The situation surrounding the re-nomination of the UCP-MJ will not affect the work of the newly established Ukrainian Orthodox Church. According to the MP from the faction of the People's Front, religious scientist Viktor Jelenski has nothing to fear.

"Currently more than 500 communities are transferred from all over Ukraine to the HCC, the process continues. The court's decision will in no way affect the work of the church, this is a completely separate matter, "said the CITIZEN MP.

They reacted sharply to the statement of the court and the PCU. Thus, the Archbishop of Chernigov and Neginsky Eustratia Zora noted that no court can make the "Moscow Patriarchate – not Moscow".

"By the way, in a few days, the Orthodox Church will remember the two most shameful hearings in human history," he wrote on Facebook.

"It seems to me that those political forces, which are based on the support of the Moscow Patriarchate, use the tactics of lawfully delaying the implementation of the law. Although it is valid, it is not canceled and must be executed. The time has come for the rule of law to be fulfilled, namely, three months after the publication of the decision of the Ministry of Culture, the renaming must be … Delaying the decision in the hope that the change of government may affect the process , and the relevant cases were filed, "explain details of the cause of the decision by air ObozTV Evstratius Zora.

Watch the video on:

Obviously, the issue of renaming UOC-MP will hang in the air. On the one hand, MEPs managed to promote it to the Constitutional Court, which will check the Council's decision for the absence of contradictions to the Basic Law and this time.

On the other hand, if you wish, the Cabinet of Ministers will not be able to impose sanctions against the Moscow Patriarchate, to which Deputy Prime Minister Vyacheslav Kirilenko speaks earlier.

"If the religious denomination does not meet the norms of the law, then the relevant state institution can cancel the registration of the status as not complying with the legislation in force – at least in part on its name," he explained.

Do not miss the flash! Subscribe to our Telegram