Zinchenko – a record key to gold: English media praises and … somewhat criticize the Ukrainians in the derby of Manchester United – Man City 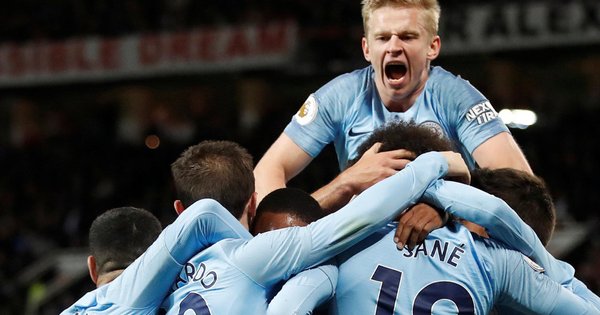 Alexander Zincchenko continues to win exclusively in the Premier League. At that time, the midfielder of the Ukrainian national team made a decent performance in the derby of Manchester, which led his team to the first place in the England 2018/19 championship.

Zinchenko helped Manchester City beat Manchester United at Old Trafford. There is such a sign when "citizens" triumph to zero in the neighborhood of their neighbors, then the Premier League will certainly win. Well, at least now that all games played equally, Guardiola's team defeated Liverpool by 1 point. Zinchenko and Co. were honored with the names of the two toughest trials in the final of the season, defeating Tottenham and Manchester United. Then only current champions can give the gold to Kloop's wins if they lose points somewhere because they will not have more rivals than the top 6 submarines. 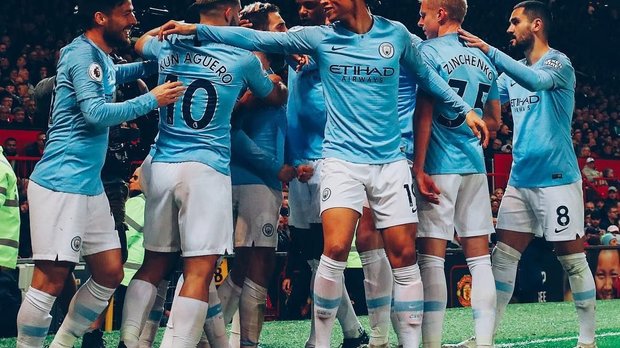 And we will go through the reaction of the statistical portals and the British media to the Ukrainian game, which is forced to close the left wing of the championship defense. If Sofascore and Whoscored were unanimous in their assessment, the British press was divided. But more about that later. From Whoscored Alexander received the highest score among the defenders of both teams – 7.42. This is also the third highest score among the players of all teams (after Bernard Silva and Sterling who made the score in the attack)! 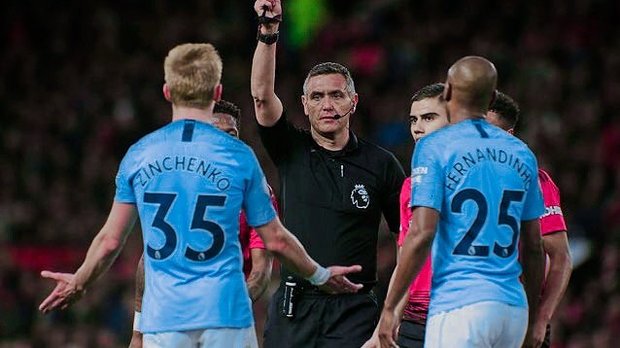 Zinchenko won 2 fouls, mostly in Manchester City. He became the leader among all the players in set-off – the only one who did it 4 times. On the other hand, no one in the city more often than a Ukrainian deprives himself (3), and in the conditions of our UPL he could fall into red. This, however, is offset by the excellent selection work: 4 successful attempts as the highest score for both opponents. And another 5 duels per horse have been won and the incredible 124 touches to the ball lead to most gears (100) and particularly accurate (89). 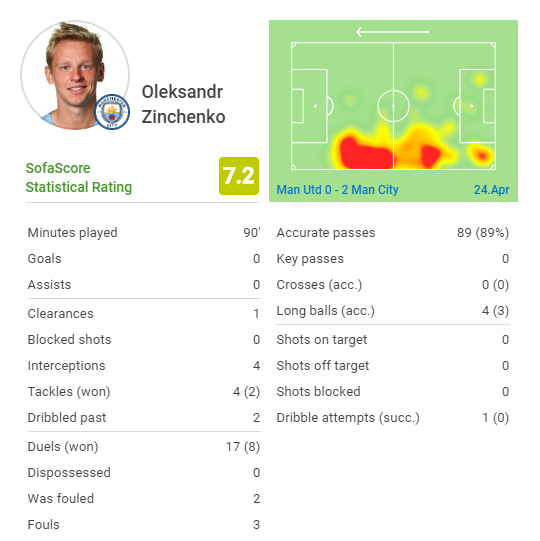 Sofascore is a bit more rigorous in the ratings (7.2), but for some reason there were two more successful selections that count: this is the seventh result among all who were on the pitch and the third in the defense of the city. We draw attention to the eight martial arts gains of the 17 in general. This is the largest number of duels in the two teams, indicating that MY's attempt to put pressure on Zinchenko's flank as the weakest link. Sasha, however, is far from a scourge boy, so he showed the second result of the matches won after Stirling. Although you can work more on the percentage – for example, the opponent of the Ukrainian, right Fulbek MJ Ashley Young won 8 out of 10. 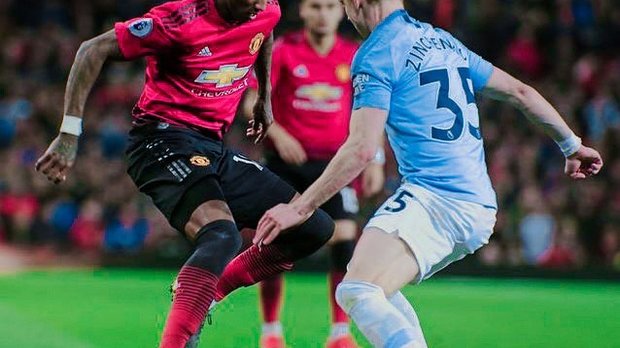 Alexander's key role in the potential championship was marked by the same Whoscored and The Sun. Just look at this amazing statistics. Zincchenko 's effect is that Manchester City has won all 19 Premier League matches with him and not 77.8%. On average, Guardiola's team scores slightly less (2.63 vs. 2.69), but with the goals scored, the situation is significantly better: 0.32 with Ukrainian, 0.8 without him.

"Zinchenko continues his incredible record series of 19: 0. City fans hope to continue until the end of the season with a score of 22: 0." So the tabloid The Sun describes an incredible indicator of the victories of a Ukrainian Premier League by resorting to a game of words: ZINVINCIBLE, which can be translated as ZINVINDIME. City broke the historic record of the England Championship for the season, reaching the mark of 157 goals – it did not happen to anyone in Foggy Albion. Moreover, Ajax alone can kill them all over Europe. 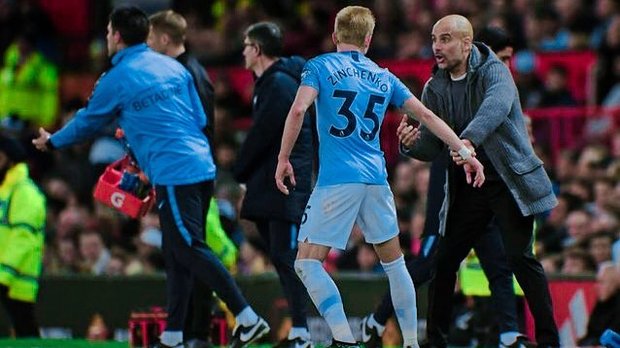 "However, the incredible individual statistics of the Ukrainian star may be even more impressive." The midfielder, who also covers the full back position, has an incredibly successful Premier League 19: 0. After that he went on the next year until Guardiola began trusts and stakes on it, starting on February 27 and playing against West Ham (1: 0).

Manchester United became his next victim, and now Guardiola faces the temptation to attract him in the future in an effort to retain the title of England's champions. The city awaits the departure for Burnley and the arrival of Leicester before the Brighton final. Both the coach and the fans crossed their fingers to win Zincchenko in the Premier League, bringing his series to 22: 0. 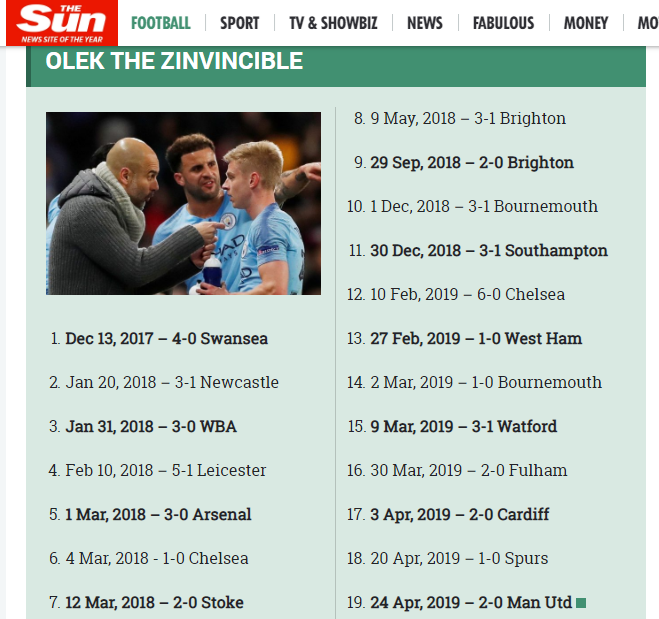 In general, most of the English media praise the Ukrainian game, which is again at the top of the Manchester City food chain. Olek, as they call it here, perfectly interacts not only with Lyapport and Gundogan who were close to him but also with David Silva. He is commended by Sasha and the respected The Times, who calls our footballer one of the few defining players to win the Manchester derby. 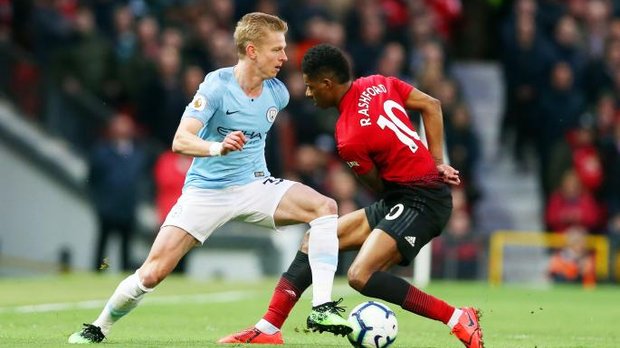 "The wagon, which fans sometimes confuse with Kevin de Braine, asks for a picture, feels like a house in the cohort of the city's stars, skillfully filling the left side, often playing in the middle of the pitch and making it very noticeable. he is a man with the character of a champion and always excited by his mood, even with a yellow card he continues to play his role.

Zina herself went into the social network and even pushed her opponent Ashley Young, who he thinks plays handball in this episode (see below).

However, it is not without fly in the ointment. In a sense, the Ukrainian national team has become an apple of discord between the English media. In general, he was criticized for his "stupid warning," which made him play under pressure and trouble with the quick Rehford. The authoritative Guardian underestimated the score to 5, they say, "I have a yellow fight with the pace with all my might," but this is already the highest score among the defenders.

The Daily Mail recalled that initially Zincchenko was sweating heavily because of Rehford's bustle but then calmed down – 6 points. But Manning Wenning Noah was given a five, merciless and somewhat unfair sentence that had not been agreed by other experts: "He treats the ball unreasonably and regularly misses the good positions of the partners." 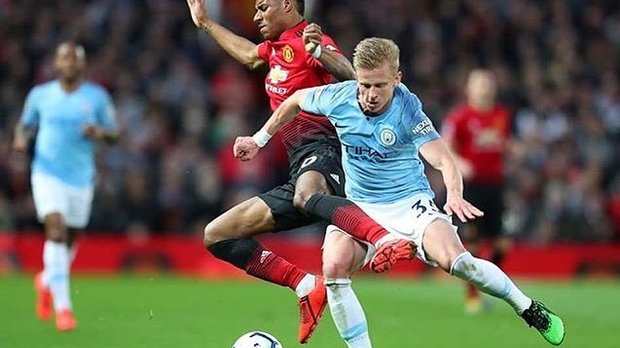 ESPN, on the other hand, appreciated his efforts to work on the attack, raising to 7. Sky Sports also gave the second highest score (7) to his actions: "It seemed unconvincing before the break, and the yellow for Yangu's late rotation was no surprise. in the second half the city began to play better, as did Zinchenko, who currently deserves his place to play in the Premier League. Indeed, you only see how impressive it is in comparison to other influences on the game. Such a hidden soldier of victory, hidden by the rays of glory. 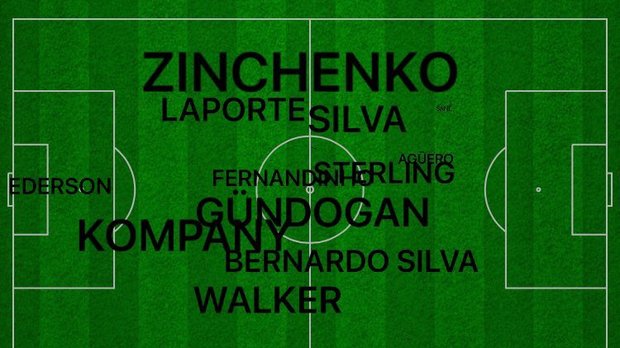 Read Mancity's fan site praised Alexander for good 7 points: "I hope he will stay next season." "Hard work, quality performance." His smart transfer allowed us to get out of United pressure, but mostly from energy and the determination with which Zinchenko went to take his ball. "

In fact, the cuts that emerged on the net clearly show how cleverly the 22-year-old Ukrainian first goes under high tension with Aguero and Silva, and then starts the motorcycle of the city's attacks after appearing to calm the opponent's vigilance. the ball back and back. 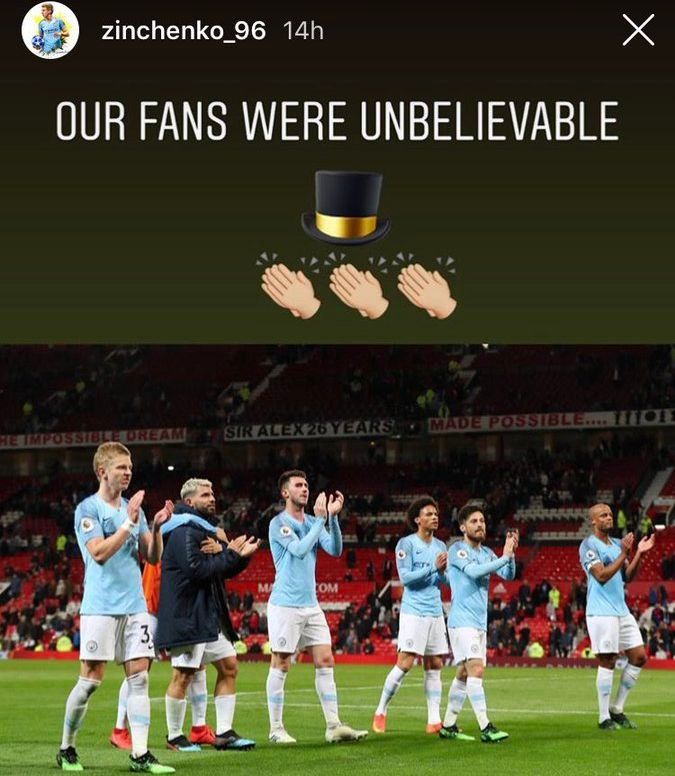 Coach Voices shows how with the possession of his team, Fulbak Zinchenko and Walker moved to the center, forming a kind of triangle and allowing Fernandinho to create the width of attacks on the flank midfielders through the pass.

Overall, Zincchenko's game has once again become a symbol of how much Gardardo can transform its players, and worldwide – why the coaching hand is extremely important even in teams with a deluxe and expensive selection of performers.