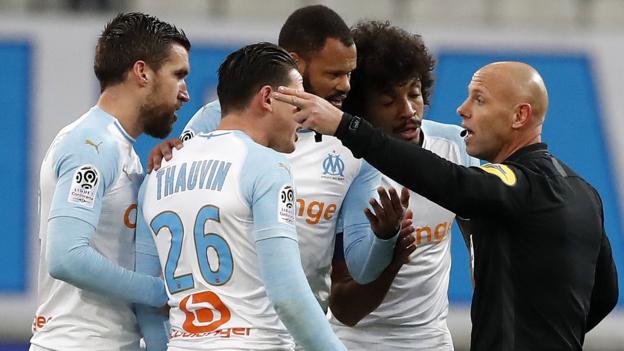 Mario Balotelli scored a goal but his debut for Marseille ended with a defeat from Lille in a game detained for 31 minutes in the second half after a firefighter thrown by a fan exploded close to two players.

Kevin Strumman and Jordan Amavi escaped unharmed and the referee took the two groups of players off the pitch.

The match began with a 10-minute strike by the hosts in protest against the club's owners and coach.

The League 1 collision with players received nine yellow cards and one red.

Former striker of Manchester City and Liverpool Balotelli joined Marseilles from Nice on a free transfer on Wednesday and appeared as a substitute on the 74th minute but his comforting time came after Nicholas Pepe hit both sides halfway through.

Former Newcastle midfielder Florian Tauvin was fired for hosts in the second half for two crimes to be booked.

Large parts of the stands behind the targets were empty for the opening minutes, except banners protested against owner Frank McCarthy, President Jacques-Henri Eiro and coach Rudi Garcia.

The match stopped at 57 minutes when the fireworks exploded to Stuttman's foot before lasting more than half an hour later.

The drama was not over, as the game ended when Marseille's players criticized Judge Amari Deleru and some fans rushed to the field.

Marseille won only once since the end of November and was then eliminated from three tournament races and dropped to seventh in the league.