Mother and father of a baby persecuted by Staffordshire Bull Terrier is a parent who is not terrible, grandfather claims 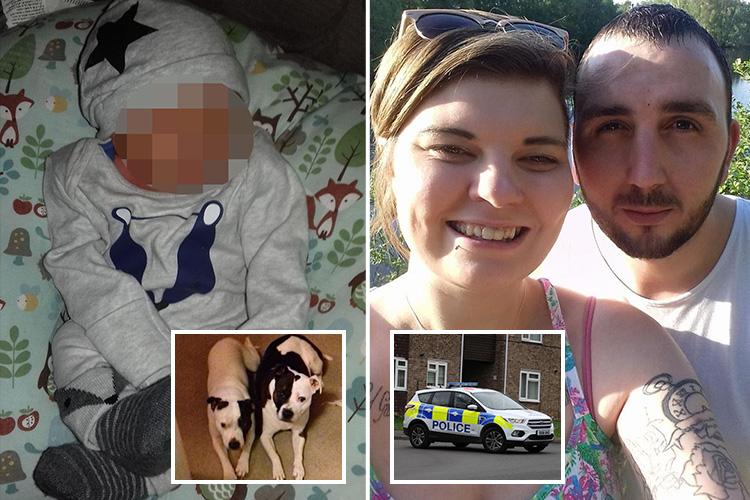 The parents of the baby boy who was attacked by the Staffordshire Bull Terrier were parents who were "not terrible", his grandfather said today.

Reuben McNulty, who is less than one month old, was attacked at 1:47 a.m. Sunday morning at a house in Yaxley, near Peterborough.

The baby is struggling for his life at Addenbrooke Hospital in Cambridge.

Today his grandfather, Paul Litchfield, described the persecution as a "strange accident" – as Ruben's unemployed parents, Dan McNulty, 31, and Amy Litchfield, 28, were described for the first time.

Speaking outside the two-bed bed of £ 160,000 he said: "The child is not good blessing him. Even parents are in a bad way. They are a little, they are destroyed.

"At the end of the day it's just a big accident and everyone makes a big thing."

Mr Litchfield added: "They have made any mistakes and the way it was described at the time, they are terrible parents.

"They don't bleed … they're fantastic. If they're terrible parents they won't sit with the young man now.

"People need to realize there are always two sides to the story.

"The problem is that there is a lot at stake here for everyone, not just them, for us too, as a family."

The pair of Staffordshire Bull Terriers, called Fizzy and Dotty, have been taken from the property and placed in police cages.

Two people were arrested on suspicion of ignoring children and released on bail until December 15.

A police spokesman said: "We were summoned by an ambulance service at 1.47 am (Sunday, November 18) to an address in Yaxley, with reports of concern for a baby boy who was attacked by a dog.

"Officers and paramedics attended the scene and the baby was taken to Peterborough City Hospital before being transferred to Addenbrooke Hospital, in Cambridge, with life-threatening injuries.

"He remained in critical condition.

"A 28-year-old woman and a 31-year-old man, both from Yaxley, were arrested on suspicion of ignoring children and have been redeemed until December 15.

"Two dogs, Staffordshire Bull Terriers, were taken from the property and in the police cage.

"The police remain in place and an investigation has been launched."

Under British law, the Dangerous Dog Act [1991] forbid four dogs to be owned or raised.

Often confused with the prohibited Pit Bull Terrier breed, the Staffordshire Bull Terrier is NOT prohibited in the UK, even though some people describe it as "dangerous".

The government advised the owner that breaking the law for any dog ​​to "be dangerous out of control anywhere".

The new bride faces JAIL for bringing a daughter, 7 years old, from school for her honeymoon

Dogs are considered dangerous out of control if they hurt someone or make someone afraid they might get hurt.

A person can face unlimited fines and / or be sent to prison for six months if their dog is dangerously out of control.

A long prison sentence can be expected if their dog injures or kills someone.

August 2016 – A three-year-old boy died after an American bulldog invaded him. The owner of Jade Dunne, 29, received 12 months in prison suspended for two years.

April 2017 – A girl, 10 thrown around "like a cloth doll" for ten minutes by an uncontrollable dog.

April 2017 – A one-year-old child was "crushed" by a dog in Chatham who was later shot dead.

June 2017 – A young girl suffered a facial wound after she was bitten by a husky.

November 2017 – Beagle partner pets are persecuted to death by two ferocious Mastiff dogs when released in the park.

December 2017 – A dog owner was jailed for four years after Staffie persecuted 12 children at a playground in Northumberland in May 2016.

February 2018 – A man who was persecuted and attacked his neighbor in jail for 10 years. The owner ignores court orders that require the dog to be muzzled, castrated and kept in public.