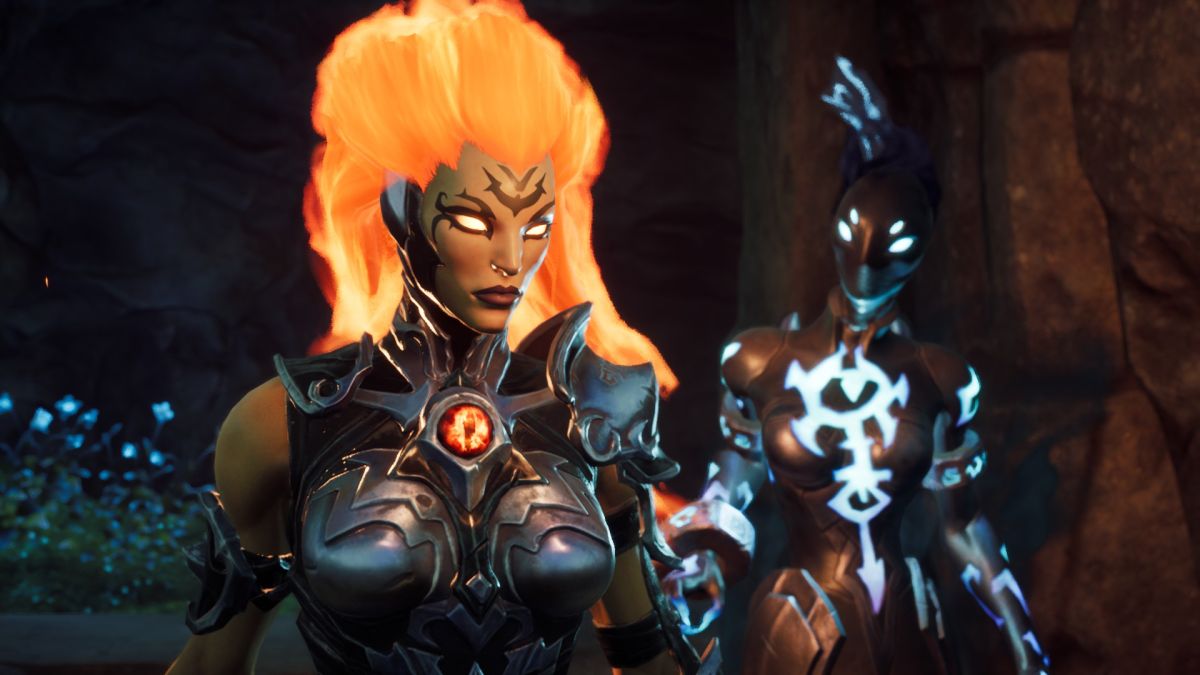 When you fight the small groups of demons as the nimble Fury (who is one of the Four Horsemen of the Apocalypse), Darksiders 3 feels special. She's agile and responsive when you tell her to dodge, and she swings her weapons into flashy arcs of elemental magic that send sparks dancing from enemy to enemy. It all looks fantastic. But when taking bigger packs, the clunky lock-on camera makes fighting frustrating, and out of combat, the platforming and puzzling are far too lightweight. It's been six years since the last Darksiders game, and this is a far cry from the return I'd hoped for.

The Charred Council has tasked Fury with stopping the apocalypse by defeating the seven deadly sins. To reach those bosses you will travel to a semi-open world, plow through waves of enemies, solve puzzles and navigate platforming sections.

The grunts are impressively varied: demon children chuck toxic goo, winged angels summon clones, and four-armed brutes behind the steel shields. Their unique abilities combined with Fury's fragility-she'll go down in three heavy strikes-means you'll have to fight with caution, noting the attack patterns before diving in.

I enjoyed this ponderous approach when facing four enemies or less. Pulling the left trigger locks the camera into one, and you can switch between targets by flicking the right stick, directing your strikes. Dodge as an enemy swings and you will trigger slow motion, setting up satisfying counters that you can combine into other moves, attacking both your default whip and one of four other weapons you pick up at fixed points in the story.

But when you fight multiple enemies – which is most of the time – the pulled-in camera does not play along. Enemies to your back or sides often jump in from off-screen and hit you in one movement, which feels unfair. A white marker warns you when that's going to happen, but keeping track of these markers, the enemies in front of you, and far-off ranged attackers is too much to ask, and I constantly felt like I was wrestling with the lock-on to focus on the right target.

Difficulty is therefore uneven: it feels right for small groups of hard-hitting enemies, but battling larger groups of often weaker foes is frustrating. Boss difficulty is similarly wonky. One-on-one battles, including in the late-game, are too easy: learn the attack pattern, dodge the right time and counter punch. But when I bought bosses that summon the minions, like the giant Sloth bug, I ran into the same camera problems as when I faced big groups of grunts, which makes them feel disproportionately hard.

The seven sins draw on familiar tropes-underwater sea monsters, giant bugs, and a huge man in fire armor – but they all have different quirks that stop them feeling boring. Sloth, for example, is sitting on a throne carried by smaller bugs, directing his army. Chip away his health bar and he will jump out of his seat, swinging a giant club.

He's also wonderfully sarcastic and has a cutting tongue-more than can be said for most of the cast. I caught the glimpses of the unabashed corniness that drew me to the first two games, but Darksiders 3 takes himself too seriously. Fury changes too much during the story, and too suddenly, for it to feel like a natural character arc, which makes it hard to come the finale.

I have a generally stable performance across the world, and my GTX 1070 could run Darksiders 3 on the highest settings at a steady 60 fps, with occasional dips in the 50s – although my framerate tanked briefly during one boss battle. I did not encounter many bugs or glitches, but in one area, on two separate occasions, the game randomly froze every five seconds, and I could only fix it by restarting. Those moments were annoying but they were rare enough that they did not ruin the game, and the developer is promising a release hotfix to patch the worst problems.

Also note that Darksiders 3 is playable with a mouse and keyboard controls are remappable too – but it is really built for a controller and I would recommend using one.

Outside of combat, puzzling and platforming are underwhelming. There's no wall-running or climbing as in Darksiders 2-you'll be whip-swinging between conveniently-placed metal bars and lots that offers little challenge. Puzzles are unimaginative early on: I've lost count of how many times I had to lead a bug to a pool of fire, watch it fill with flames, and throw it at a cobweb to reveal a path.

The puzzles are better in the last third, where you will have to combine powers you pick up during the story in quick succession. In one, I used my power to knock a beam round and round, following up with stasis to freeze it when it was perfectly positioned for me to use as a swinging anchor point. Hardly taxing, but it's at least made me think.

Environments also improve as the game goes on. For the first four hours I was stuck squashing bugs in generic sewers, but above ground it's very pretty. I fought demons on a crumbling highway, in underwater ruins, and in a broken city in which giant trees snake through windows. The art style is a standard fantasy fare, but it's bright and colorful.

I like the flexibility in the order you can make some of the seven deadly sins too. Your compass tells you the closest one, but you can backtrack and explore to find others. Sadly, the lack of proper loot – you will not find any weapons or armor – gives you little reason to poke around the environments. Side paths yield resources for upgrading your weapons, but you're just bumping up the damage output, and there's only a handful of unique enchantments to slot into weapons, such as one that heals you as you deal damage, which is not particularly interesting .

With less loot to grab, simplified platforming and easy puzzles, Darksiders 3 leans harder on its combat than previous games. And while Fury packs and punch, the wonky camera makes fights more frustrating that they should be. It does not condemn Darksiders to the oblivion, but it's the lowlight of the series so far.