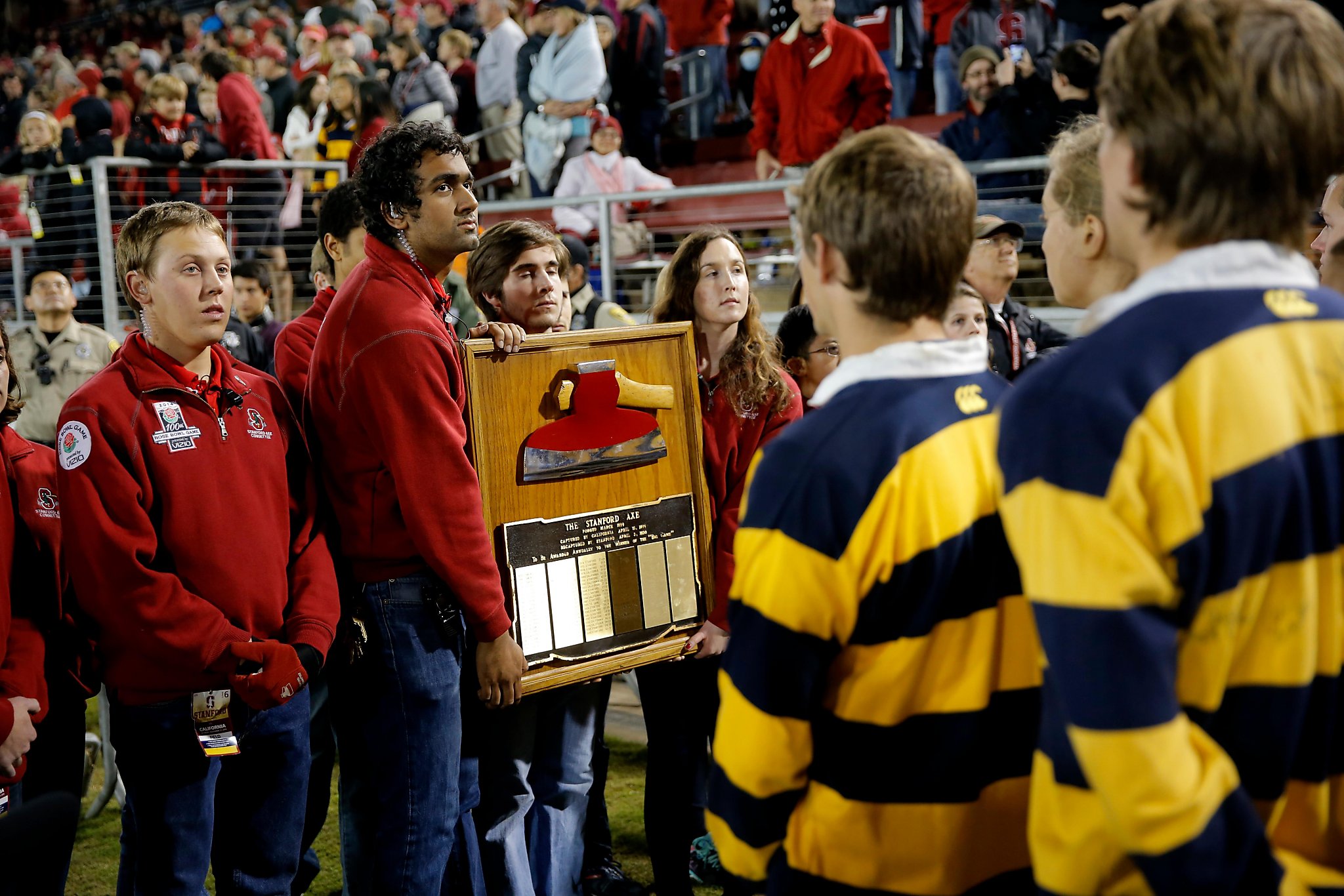 Stanford students hold the Ax – which is kept by the winning team in the Big Game. Stanford has been in possession of the Ax for eight years.

Stanford students hold the Ax – which is kept by the winning team in the Big Game. Stanford has been in possession of the Ax for eight years.

Saturday's Big Game has been postponed because of sustaining healthy water quality in the wildfires in Butte County – a 100-plus-year moment in landmark history of the rivalry.

Cal, which was to host the game at Memorial Stadium, issued a statement Friday afternoon, about 27 hours before the football game against Stanford was scheduled to kick off.

The 121st Big Game has been moved to Dec. 1. Kickoff will be noon at the broadcast game by Pac-12 Network.

"After extensive consultation with the campus of medical and environmental experts, the Pac-12 Conference and Stanford, UC Berkeley's Chancellor, Carol Christ, and Director of Athletics Jim Knowlton concluded that the game should be considered due to health and well-being of student-athletes, staff, bands and student groups, and fans, "Cal said in a statement …

"While the campus' is provided by the Bay Area Air Quality Management District, and the air quality index (AQI) levels are unlikely to be sufficiently sufficient improve by Saturday afternoon. "

The statement went on to say that all the tickets to Saturday's game will be honored on Dec. 1.

The only years since 1892 in which the traditional rivalry was played were during World War I (1915-18) and World War II (1943-45). The 1963 Big Game was postponed a week after the assassination of President John F. Kennedy.

"We have been carefully tracking water quality in Berkeley and the Bay Area over the past week, relying on the best data and guidance available to us from medical and environmental experts," Cal athletic director Jim Knowlton said in the statement. "The forecasts we have received show a minimum of chance of improvement are necessary to hold the game on Saturday. While we would have preferred to play the Big Game on its scheduled date, we realized that the water quality would not be acceptable for the health and safety of our student-athletes, coaches, gameday staff , students, bands and spirit groups, alumni and fans.

"So much of the Big Game experience includes parties and friends with family and family before and after the game with football as the centerpiece of a full day of celebration. While we used NCAA and Pac-12 air quality guidelines for help steer our decision, the well-being of our fans was also a key factor. We are fortunate that Cal and Stanford have an open date that works for both teams, and we are looking forward to hosting the Cardinal in two weeks.

"On the basis of the Cal Athletics community I also want to offer my prayers, support and support for wildfires in California, as well as my passion for the fighters battling the blazes, the first-responders and the thousands who are providing support. We hope that we will begin the process of healing and recovery. "

Cal head coach Justin Wilcox also directed attention towards the victims of the fire which has killed more than 60 people in Paradise. More than 600 people are reported still missing.

"First of all, our thoughts are with everyone who has been affected by the tragic California wildfires," the Wilcox's statement read. "While we are aware of the Big Game, right now our thoughts are centered around so many who have been deeply affected.

"Our primary factors in making the decision to post the game were centered around the health and safety of our student athletes, fans and everyone were involved in putting on the game. We look forward to seeing you in Berkeley on December 1. "