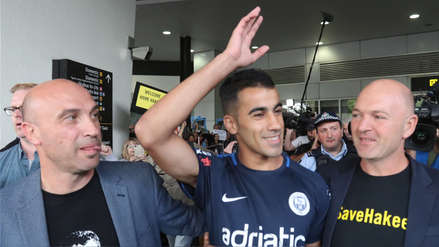 The footballer and refugee Barreini Hakeem al Araibi He arrived in Melbourne, Australia, after spending more than two months in Thailand's detention facility for a request for extradition to his country.

The player landed at about 8:00 am (Peruvian Time) and was greeted by a crowd of supporters and media waiting outside the terminal "Welcome to Hakeem Home".

"I will be stronger for Australia, Australia is my country, I love Australia," added the footballer, accompanied by former Australian national football team captain Greg Foster, who runs a campaign to secure his release.

A Thai court ordered the release of Al Arabi on Monday after the prosecutor's office withdrew the petition filed by Bahrain against the 25-year-old footballer and semi-professional player Pasko Veil.

The player who arrived in Australia in 2014 after escaping from his country was arrested on November 27 when he arrived in Bangkok with his wife to spend the honeymoon.

The arrest is due to an Interpol order, which was later withdrawn, and to a request for extradition filed by Bahrain, which sentenced him in absentia to ten years in prison for damage to a police station during an Arab spring protest.

The case was tense in the relationship between Thailand and Australia, whose government has repeatedly demanded the release of Al Arabi, which he admits as a refugee in 2017, to which FIFA and prominent athletes joined.

A footballer who has convicted that he was tortured in 2012 before escaping from Bahrain defended his innocence by claiming that when the events he was convicted of, he challenged a match with his national team.

(With information from EFE)