WhatsApp will include photo and emoticons shortcuts processed on Android

The WhatsApp Beta versions are not final, but rather a test field where new features are added before they are launched for all users. By analyzing them, you can find the future options the message app intends to include. We recently learned that the app will soon include stickers from other keyboards.

WhatsApp adds two new features for version 2.19.18 to its beta version of Android

Now the latest Android beta update includes two new features that have already been noticed in the iOS version. First, shortcuts will be added to take action with uploaded and received photos. There are three, "Show in chat", "determine how" and "rotate",

When you open a photo, these shortcuts will be displayed and the first option will be enabled show a photo in chat in the message it was sent to put it in context. The second option (how will) will allow you to quickly place an image as a profile photo, group image, or WhatsApp background. The Rotate option will allow you to rotate an image without having to exit WhatsApp.

Finally, changes (in some cases almost unobtrusive) will be added to 357 emojis. In the photo provided by the WABetaInfo portal, you can see some of the changes made. 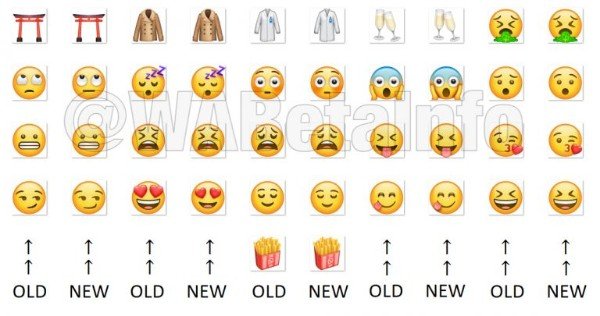 These are undoubtedly minor additions, but it does not hurt to include new features to make it easier to use the app. Some of the options added to the beta are faithful updates that can change the way we use the IM application.

Proof of this is evidence of a system of Fingerprint Authentication, which we are talking about in this article. Like all updates that appear in the beta, there is no exact date for running photo shortcuts and new emojis, although given that it already exists for the beta version of the two operating systems, we will not have to wait too long long.