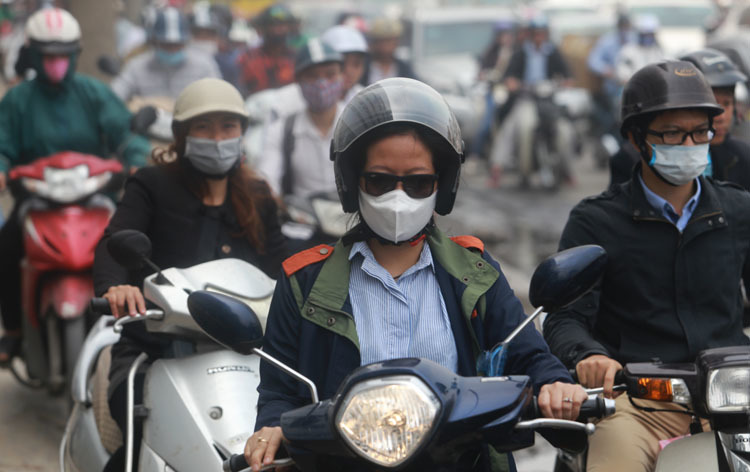 Air pollution in Hanoi jumped sharply in the peak hours by about 70 percent of the fine dust emitted by cars and motorcycles.

Organization of air quality monitoring AirVisual It has just published a list of the world's most polluted countries and cities in 2018. Based on the amount of PM2.5 virus in the air, Hanoi ranks second in Southeast Asia and 12 worlds by pollution level.

"Over 70% of the fine dust in the air emitted by motorcycles and cars, and the rest comes from industrial production, construction and people's activities," Dang said.

Based on the observations, Mr. Mai Trong Thai, Director of Environmental Protection at Hanoi, also said that the dust evolution in the capital is fluctuating due to traffic activities. In particular, dust increased significantly during the peak hours of 7-8h and 18-19h, decreasing to the lowest morning from 13-14am and at 23h-1h at night.

Moreover, the results of monitoring in early 2019 showed that the atmosphere tends to worsen in Tette's holidays when the volume of traffic is increasing; then better on and after Tet.

From the results of 10 block monitoring stations, Mr. Thai assessed the air quality in Hanoi in 2018, improved compared to 2017. He pointed out that the air quality index at the "bad" level was recorded at the station. Trung Yen 3 (residential area) and Minh Khai (traffic area) in 2017 are respectively 0% and 0.3%. In 2018, at both stations, there were no "bad" days.

"The city has to develop public transport such as trams and buses." Restricting private vehicles will reduce harmful dust and improve air quality, "said Thailand.

Hanoi has 5.8 million motorcycles, 0.7 million cars and some 1.2 million cars outside the province often go to the area.

In mid-2017, the City People's Council approved a resolution on transport management, where by 2030 the capital would stop operating motorcycles in urban areas. the drafting of a publication project showed that in more than 15 000 surveys collected in 30 districts, more than 90% of respondents supported the project and the motorcycle roadmap.