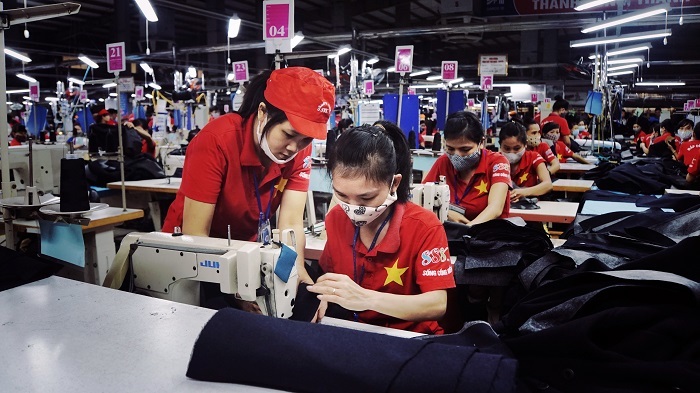 The textile and clothing industry is one of the benefits of the Vietnam-EU Free Trade Agreement (EVFTA). However, without a formal policy, the possibility lies only on paper.

Increasing opportunities for Vietnamese textiles and clothing in the EU

At the "Textile and Clothing Industry Seminar in Vietnam" on Challenges and Opportunities in the European Market ", organized by the Government Information Portal on 2 August, Mr Luong Hoang Tai, Director of the Multilateral Trade Policy Department (Ministry of Industry and Trade) said: The outsiders are considering the EVFTA agreement, the first reaction is that it is an opportunity and favorable for the textile industry. Because the tariffs for all textiles and clothing will be reduced to 0%, of which 77% will return to 0% as soon as the agreement enters into force. In the meantime, the EU is the global textile and clothing import market, and the EU is the second largest export market for Vietnamese textiles and clothing.

According to Luong Hoang Tai, long-term traders may find that EVFTA – with strong reform requirements – can create major challenges for traditional industries such as the textile industry.

The Vietnamese textile and clothing industry is developing on a large scale, based on cheap labor. But this is an industry with great competition worldwide. If an investor in Vietnam encounters problems like increased costs, there is no sustainable supply chain, then they can move to another country.

Therefore, according to a representative from the Ministry of Industry and Trade, Vietnam must create a stable and long-term supply chain that does not allow investors to relocate production facilities to other countries. This also contributes to the higher added value of Vietnamese textiles and clothing.

Ms Nguyen Thi Thu Trang, Director of the WTO Center, said: With the textile and clothing industry, the EU is an extremely large and extremely attractive market. In 2018, Vietnamese textiles and clothing were exported to Europe with $ 5.6 billion. This is a very large number, but it represents only more than 2% of total European textile imports. This shows that the geographical balance of the European market is huge.

Mr. Vu Duc Giang, Chairman of the Vietnamese Textile and Apparel Association, shared: This year, the Association aims to export $ 40 billion worth of Vietnamese textiles and apparel. In particular, the largest market is the United States, accounting for 42% of Vietnam's total textile and clothing export turnover. Second is the EU market, the ability to account for 21.5% of the 20% target. Japan ranks third with 19.5%. Wednesday South Korea is up 14% …

"The EU is still a key and long-term strategic market as EU textile and clothing orders are a product line with higher added value than other markets," Wu Duk Gang said, as the EU also has a long-term market. relations since 1992, the understanding is huge.

According to Mr Zhang, there is extremely strong competition in the textile industry, especially in relation to product prices. Vietnam ranks third behind China and India, but some countries are close behind. Therefore, if Vietnam does not set a good strategy, it will be difficult to gain access to the EU market.

However, in order to take the opportunity of EVFTA, the textile and clothing industry faces a supply shortage that has to comply with the rules of origin in this Free Trade Agreement.

Ms Nguyen Thi Thu Trang, Director of the WTO Center, said: The problem with the supply of materials is not only a challenge for the textile industry. If the rules of origin are not guaranteed, Vietnamese goods are not allowed. Providing Vietnamese rules of origin and textiles are eligible for preferential treatment by EVFTA.

"Although much effort has been made, about 90% of our raw materials are imported from non-member sources and are not eligible for the incentives included in the agreement," Trang said.

According to a WTO center representative, the textile and clothing industry is not considered to be the most profitable sector in the growth of production or exports to the EU, but the industry has benefited most from the development of global production and supply chains. With the high requirements of the rules of origin in EVFTA, as in many other agreements, the motivation is to attract domestic and foreign investment in the textile and dyeing industries in Vietnam.

Several years ago, it was difficult for Vietnam to follow the rules of origin for yarns, but now it is much more advanced and we have been exporting yarn. "I hope that with the driving force created by EVFTA, CPTPP or other agreements, the future of investments in textiles and clothing in Vietnam will be better by welcoming the supply of Vietnamese textiles and clothing," a representative of the Center. The WTO is optimistic.

Mr Vu Duc Giang said that in the past, EU companies did not invest in textiles and clothing in Vietnam, but in 2018 a German corporation invests in a Da Lat woolen factory. This also motivates local and foreign companies to invest in supply shortages in Vietnam.

But the reality is that a number of localities are refusing painting projects because of environmental concerns.

Speaking about local problems, Mr Vu Duc Giang said that this was due to "insufficient awareness".

"The system of modern wastewater treatment technologies in the world is extremely advanced. We invested in a factory in Bao Min Industrial Park, near the factory with no odor, no dark water like before. We have also reached the stage of wastewater reuse for production, ”said Jang.

So the chairman of the Textile and Apparel Association assures the localities not to worry too much about this. "Our clients are tougher than many local authorities. If they do not comply with the environmental regulations, they will not buy our products, "Mr. Gian said.