Of course, they are not sold to customers at low prices, the man keeps the knife firmly in the middle of the market 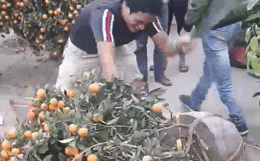 (Fatherland) – The movie of this man's action quickly drew the attention of social networks on the 29th day of the New Year.

So there is only one more day until the New Year's Eve, entering the KHI year. Today, February 3 (Tet 29), many families are still in a hurry to buy a need to get ready for a full Tet.

According to the psychology of the majority, the closer to the 30th New Year's Eve, the more people want to buy cheap goods, while the small merchants want to sell the good so they accept the loss, the person who is determined not to sell . So the story below is happening in the video below.

In the clip a man holds a knife to cut any tree in the middle of the market in front of many people around him. The reason is that the trees that are sold here are too cheap for customers. Sorry for his efforts, this small business has destroyed its trees by kumquat instead of selling cheaply to customers.

The video is filmed in Ha Long Flower Market, Quang Ninh and is one of the hottest topics on social networks today.