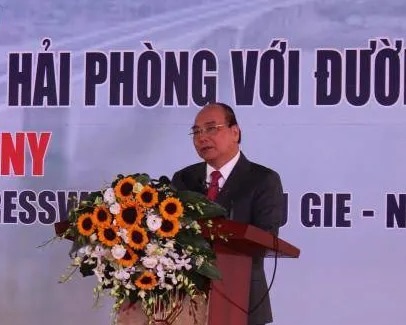 Speaking at the ceremony, Prime Minister Nguyen Siuan Fuk said the work was opened and put into operation to connect the key economy of the North, strategically, to bring labor productivity to the local, economic regions gather together.

Prime Minister Nguyen Siuan Fuk praised the Ministry of Transport, highly appreciating the construction unit, a consultant who adheres to the construction site, pointing in time, ensuring the quality of the project over a 5-month period. The prime minister also praised the contribution of local residents in Huan Yen and Ham Nam when there were 6,000 relocated households for a particularly important route.

The head of the government has asked the Ministry of Transport, the Ministry of Public Security and the two provinces of Hun Yen and Ha Nam to ensure traffic safety to rigorously deal with traffic violations to make effective use of works.

"The projects put into operation will link and improve the operation capacity of two Hanoi – Hai Phong highways and the Kau Gui – Nin Bin highways, creating a great deal of motivation for the socio – economic development of the two provinces. Hung Yen, Ham Nam in particular and the North Key Economic Region as a whole. On both sides of the road linking the Hanoi-Hai Phong highway to the Kau Gui-Nin Bin highway, there is a need for economic restructuring towards urbanization so that Ham Nam and Hoon Yen have new resilience when traffic is in place – emphasized the prime minister.

The beginning of the route is linked to the interchange between the HH39 highway and Hanoi – Hai Fong (km20 + 250 belongs to the Hanoi – Hai Fong highway), Lee Zheng Kieet, Yen, Hun Yen District. The end of the line connects to the Liem Tuyen junction + 727 belongs to the Cau Gie – Ninh Binh Highway, Liem Tuyen Municipality, Thanh Liem District, Ha Nam province, the total length of the route is about 47.70 km.

The total investment of the project was 2,969,118 million VND, of which 2,469,283 million VND were attracted (equivalent to 117 million USD), the counterparty being VND 499,853 million. Source of Capital: Loans from the Korean Economic Co-operation Fund (EDCF) and co-financed by the Government of Vietnam.

For the Han Ha Bridge, this is a permanent bridge, with 4 lanes for motor vehicles and 2 lanes for elementary vehicles. The bridge has 41 plots, the main structure of the frame uses a pre-tensioned pre-reinforced reinforced concrete box with a length of 645 m.

The project was launched in December 2015, so far the project has been completed to provide technical standards, traffic safety conditions and 4 months earlier.

The Hang Ha Bridge Project and the road linking the Hanoi – Hai Phong highway with the Kau Gui – Nin Bing highway will be put into operation and will connect and improve the operation capacity of two Hanoi – Hai highways. Cau Gie-Ninh Binh Expressway Room, creating a great motivation for the socio-economic development of the provinces of Hung Yen and Ha Nam and in particular the Northern Key Economic Region.