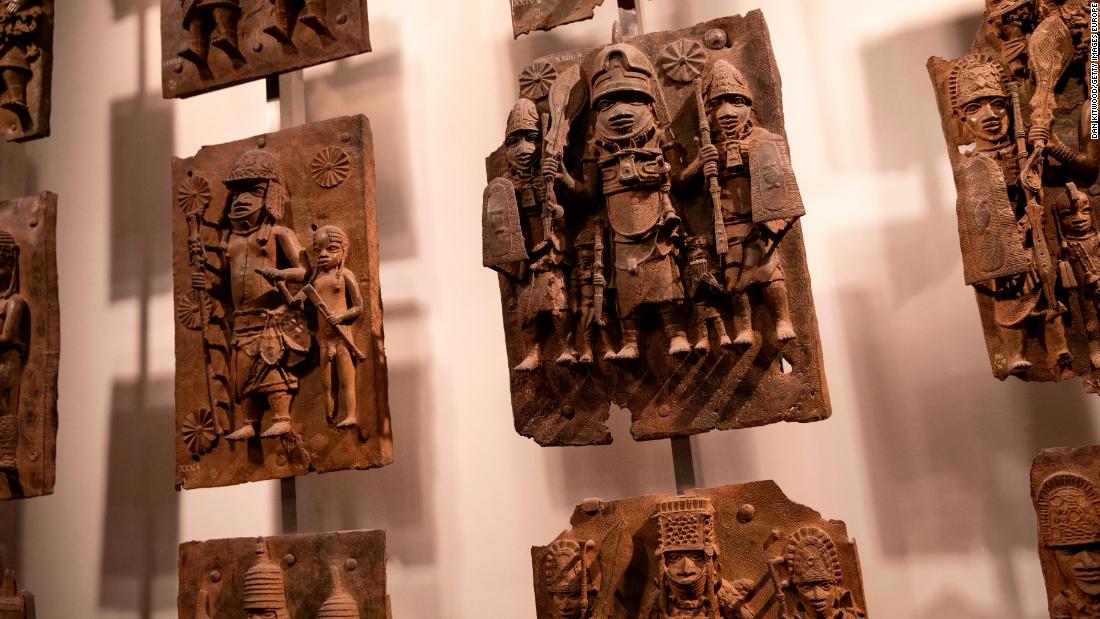 Mark Horton is Professor of Archeology at the University of Bristol, UK. The comments expressed in this comment are his.

CNN demonstrates the work of The Conversation, collaboration between journalists and scientists to deliver news and comments. Content is produced only by The Conversation.

European museums are under increasing pressure to return irreplaceable artifacts, looted during colonial times. As an archaeologist working in Africa, this debate has a very real impact on my research.

I take advantage of the convenience of access by Western museums while I am struck by the ethical difficulties of how they have been taken there by illegal means and by the guilt that my colleagues in Africa can not have the resources to see materials from their own a country that is stored thousands of kilometers.

Now a report commissioned by French President Emanuel Macron recommends that the art captured by Sub-Saharan Africa in the colonial era should be returned through permanent restitution.

Benin wants to restore his national treasures, which were taken to France and are currently exhibited at the Quai Branly, a museum presenting African art and culture. Credit: Gerard Julien / AFP / Getty Images

The 108-page study, written by French art historian Benedict Savoy and Senegalese writer and economist Fellwin Sar, talks about "theft, robbery, robbery, fraud and forcible consent" through which the colonial forces have acquired these materials. The call for "restitution" reflects the widely accepted approach, which seeks to return the art of the Nazis redeemed to its legitimate owners.

The record of the colonial powers in the African countries was frank. Colonial rule was imposed by the barrel of the weapon, with military campaigns led by the most alarmed excuses. The Benin expedition of 1897 is a criminal attack on the ancient kingdom of Benin, famous not only for its vast city and fortifications, but also for its extraordinary bronze and copper plaques and statues.

The city is burned and the British Admiralty sells the loot – more than 2000 artworks – to "pay" for the expedition. The British Museum received about 40% of the transportation. None of the artifacts remained in Africa – they are now scattered in museums and private collections around the world.

The British expedition of 1867 in the ancient kingdom of Abyssinia, which has never fully adhered to colonial control, was mounted to seemingly free missionaries and government agents detained by the emperor Teodoros II. His culmination is in the Battle of Magdalene and the plundering of priceless manuscripts, paintings and artifacts from the Ethiopian church, which are thought to be needed for eleven elephants and 200 mules to be taken by all. Most of them were in the British Library, the British Museum, and V & A, where they still remain.

Other African treasures were also taken without doubt. The famous ruins of Great Zimbabwe have been the subject of numerous excavations by associates of British businessman Cecil Rhodes, who founded the ancient ruins of Rhodesia in 1895 to rob more than 40 places of gold – and much of the archeology of the site was destroyed The emblematic soapy birds were returned to Zimbabwe from South Africa in 1981, but many items still remain in Western museums.

France to return the stolen art of the museum

Although these are the most famous cases, the vast majority of African objects in western museums are gathered by adventurers, administrators, merchants and settlers, with little thought of the legality of ownership. Even if purchased by local owners, it was often a gift and there were few checks to limit their exports. Archaeological relics, like inscriptions or inscriptions, were simply collected and taken away. Similar activities continued in the 20th century.

The argument is often mentioned that when they come to the West these items are reserved for offspring – if left in Africa, they would just rot. This is an appropriate argument, rooted in racist attitudes that somehow can not be trusted by locals to curb their own cultural heritage. It is also a product of the corrosive impact of colonialism.

The Colonial Forces had an inconsistent record of creating museums to keep these objects locally. While impressive national museums were sometimes built in colonial capitals, they were later deprived of funding or experience. Once the African states achieved independence, these museums were low on the priority list of national funding and aid and development abroad, while regional museums were almost neglected.

The Belgian Central African Museum was re-opened in December amid protests and a request by the Democratic Republic of the Congo to return stolen artifacts. Credit: GEORGE GOBET / AFP / AFP / Getty Images

Today, many museums on the African continent are semi-abandoned, climate-free, poorly trained staff and little security. There are many examples of stolen or lost collections. No wonder Western museums are reluctant to return their collections.

If the collections are to be returned, the West must take some responsibility for this state of affairs and invest in African museums and their staff. There have been some attempts to do this, but the task is enormous. It is not enough to send controversial art and objects back to an uncertain future – there must be a plan to recover the disastrous infrastructure of Africa backed by effective partnerships and real money.

Will the Musée du quai Branly, this great treasure house of world ethnography in Paris, which owns more than 70,000 objects from Africa, will be emptied of its contents? Or the massive new Humboldt Forum – a Prussian castle, rebuilt at enormous cost to house ethnographic artifacts in Berlin, opened in early 2019 – to be cut off from its African collections? There are already concerns at the British Museum that a very effective campaign could lead to the return of the statues of Rapu Nui Moai to the Easter Island.

Easter Island is trying to secure the return of a statue, known as Hoa Hakananaya, from the British Museum in London. Credit: ADRIAN DENNIS / AFP / AFP / Getty Images

This year is the 150th anniversary of the Battle of Magdala, and the V & A Museum has entered decent discussions to return its treasures to Ethiopia. But it has been reported that this will be on the basis of a long-term loan and will depend on the Ethiopian government withdrawing its claim to recover the plundered objects. The Prussian Foundation in Berlin made a similar agreement that did not wish to transfer ownership of a small piece of soapy bird to the Government of Zimbabwe in 2000.

The Savoy and Sarr report offers the hope that such deals can become something of the past and that Africa's rich cultural heritage can be returned, restituted, and restored to the brilliant cultures that have done so.