The Queen interrupts: This fine hint reveals the Queen's feelings about Megan and Kate? | Royal | News 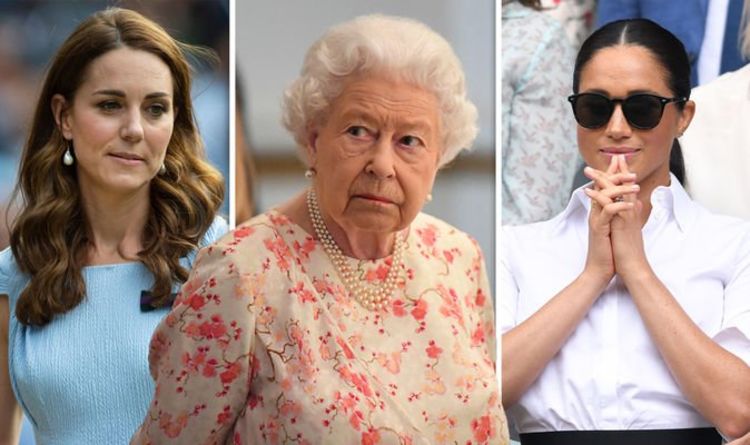 The Queen met with Boris Johnson this week, and a historical photo was taken to mark this occasion. Fans with eagle eyes have noticed details against the backdrop of the photo taken at the Queen's House, Buckingham Palace. There is a table that contains pictures of the queen's grandchildren and their partners, which provoked controversy.

On the background of the Queen's picture and Mr. Johnson on a table there are pictures of Prince Harry and Megan, Prince William and Kate.

The photo shows Megan's picture and Harry is in front of Kate and William's image.

With suggestions of enmity between the two brothers and their wives, can this hint that the queen prefers Megan to Kate?

This is hard to say because the pictures are probably positioned so that they look best on the table instead of the preference.

Read more: Meghan Markle and Harry buy LA home to be closer to the duchess's mother

The frame of Megan and Harry is smaller than that of Kate and William, so this may be a logical explanation of why she is at the front.

The pictures in question are from the official photos of the couples, with the royal faces appearing in similar positions.

Both Megan and Kate are depicted on the left side of her husband, with her left hand to show her engagement rings.

Megan's and Harry's photo was first seen in the room in May last year when the Queen met with Australian High Commissioner George Brandis.

Read more: Megan Marcel: The Queen takes the duchess under her wing

The photo of Kate and William was filmed in the US apartment in St. James's palace in November 2010.

On the right side of the same table the queen chose a rather dazed picture of William and Harry in their military uniform.

A table on the other side of the room shows pictures of Prince Charles, also in a military dress.

Another quirky feature in the queen's room was also to speak royal fans.

Read more: Megan Marl net worth: The stunning amount she has earned from costumes

The Queen had a large fan of the Dyson air conditioner, set in front of the fireplace, looking out into the room.

The expensive gadget is heated and cooled and is the model of the Dyson HP02 Hot + Cool Link, which costs £ 480.

Not surprisingly, the Queen has chosen a fan on Wednesday, as this week there is a sharp rise in temperature in the UK.

On Thursday, it was the hottest day in the UK with temperatures reaching 38.7 degrees in Cambridge.